Those good people at Eagle Rock have released ‘That Little Ol’ Band From Texas’, the 2019 documentary charting the rise of blues rockers ZZ Top, on DVD, Blu-ray and digital download. It originally premiered at a Hollywood cinema screening and continued on to have a 10 week theatrical run in the States.

And worthy of a cinema run it was. This is the lovingly crafted and beautifully presented official story of a band who have become a national institution and, one of (if not the) only band who have been around for 50 years and have never had a line up change, if you’re in ZZ Top, it’s apparently for life.

So don’t watch this expecting any backbiting or revolving band member doors. ZZ Top ain’t about that, they’re a family. But do expect drama, and laughs, and tall tales a plenty. Oh, and some of the best boogie, like, ever.

It’s a rags to riches story with a fairly straightforward construction. We have the documentary narrative, which takes us from day dot to just after the phenomenal success of ‘Eliminator’ and ‘Afterburner’ – although oddly there’s barely any mention of the following 30 years. There are occasional animated segments, mostly recounting their larger than life manager, Bill Hamm. And there is concert footage, both old and new. So new that it was filmed exclusively for the, erm, film.

The beautiful, sepia tinted footage shows the three amigos jamming and playing hits in the imposing, barn-like surroundings of the historic Gruene Hall – the oldest dance hall in Texas. Their familiarity and warmth is apparent and they hit that monstrous ZZ groove immediately. It’s blues but it isn’t. It’s rock ‘n roll but it isn’t. It’s all that and more. It’s ZZ Top is what it is, and no one does this quite like them. It’s a rare, hairy alchemy.

The documentary fleshes out everything you know. They meet, gel, jam, play to audiences of 1 (whom they bought a drink and who still turns up to gigs), tour and build momentum. Their albums start to sell more, they open for the Stones in  Hawaii (and hold their own). Then comes the infamous Worldwide Texas Tour…I won’t go into detail, you probably already know all about it, and if you don’t, you’re in for a treat.

After that comes…burnout. And drugs. They take a sabbatical and come back…weirder. Gibbons, in particular, is influenced by punk. They start to experiment with their sound just as a fledgling new TV station was setting up. It’s name…MTV. The bands new beardy look (or the Bugs Bunny look as Billy Bob Thornton puts it so succinctly) and MTV’s growing audience are a match made in heaven. It’s lightning in a bottle, we have lift off! It all hurtles past (as I’m sure it did in real life) in a technicolour blur.

You also realise fairly quickly that there is, in fact, a fourth member of the band…Texas. It’s a character in and of itself, huge, eccentric and immovable,informing and infusing everything the band do. It all ends with the band, sat around a table (in Texas), chewing the fat, shooting the shit. Their bond and brotherhood is clear to be seen and can’t be faked. And off they drive together, appropriately enough, in a kick-ass hot rod.

It’s a great film, fairly brief but everything is in there. The DVD also contains some great extras, including the complete footage of the Gruene Hall mini concert plus 80’s pre-Eliminator footage from Dusty Hill’s personal archive. If you’re in any way a fan of the band, this is a must. 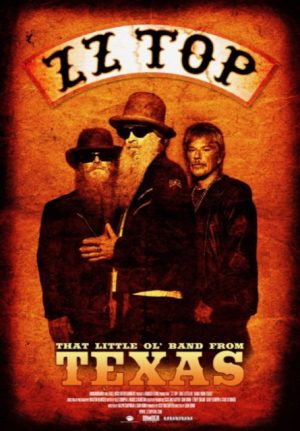