Mick Fleetwood and Samantha Fox, Evil Knievel and Snake River Canyon, the Great British public and referendums – some combinations are doomed to failure. You just know it, you can see it coming. Also, in other news, neo classical 80’s guitar shredder Yngwie Malmsteen has been convinced to record a blues album. So, will we get to hear a hitherto untapped affinity with the Mississippi delta?

We kick off with one of the four original Malmsteen tracks on the album, ‘Blue Lightning’. A Hendrixy intro and thunderous drums lead into a time travelling big haired late 80’s rock riff. Barely a minute later we’re into the widdly stuff…arpeggio’s, and lots of them. None of this is subtle, and, be honest, did you really expect it to be? The actual song rapidly disappears under the weight of the soloing.

And from there we’re off into the covers. ‘Foxey Lady’ gives us a big old metallic appropriation of the Hendrix riff while, unfortunately, omitting any of its sex, soul or groove. Within minutes Yngwie has spiralled off into a solo again which goes on for twice as long as the verse which preceded it. Jimi was great, he knew when to rein it in. But hey, this is Yngwie Malmsteen, who once famously said, “how can less be more? More is more!”.

And that, sadly, sets the tone for the rest of the album. The originals are business as usual for YM, amplified classical instrumentals and love letters to Ferrari’s, devoid of an ounce of blues. There’s no pain, no heart, no suffering or empathy or hard won joy of life. No light, no dark. They’re technically dazzling black holes of sound, nothing with feeling can exist anywhere near these compositions.

And so, to the covers. They are performed, to a song, turned all the way up to 11. There are two Deep Purple songs which are almost treated with reverence, concise and relatively faithful. Perhaps even Mr. “you’ve released the fury” Malmsteen knows better than to fuck with Blackmore. The rest of the tracks suffer the same fate, drowned in identikit solos to the point that tracks such as ‘Paint It Black’ and ‘Forever Man’ are virtually unrecognisable.

The choice of covers, too, is uninspired and obvious. Plus, for a blues album, there is a rather noticeable lack of actual blues songs. There is nothing on offer here from any of the originators. The blues were not invented by Hendrix and Clapton – as good and important as they are, they were appropriators, second or third generation bluesmen.

This is, perhaps, the ultimate rock Marmite album. If you’re a Malmsteen fan, you’ll love it. If not, this won’t convert you. If you’re a blues fan…approach with extreme caution. Yes, it’s probably technically stunning but it is utterly devoid of heart. It’s chock full of the kind of guitar wankery that most guitarists get out of their system in their teens. And no, I couldn’t play this myself but then nor would I want to. Produced by Malmsteen, anything that isn’t a guitar feels like an afterthought. When Bill and Ted finally learned to play their guitars, this is how they would have sounded!

But hey, you pays your money and you takes your choice. If you’re a techno guitar nut this may well be your new blueprint, your bible. If, however, you normally enjoy a bit of feeling and emotion in your music, leave any expectations at the door and enjoy this for what it is. 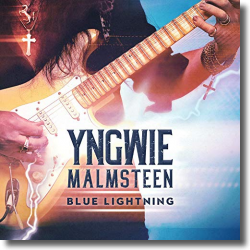