Yeti Love is the eponymous debut album by alt acoustic rock/folk outfit…whoa, hang on – can all acoustic albums really rock? Does this album have essence of rock? Yes, this duo quote Discharge and Minor Threat as influences but is folk really the new punk and can the beardies really bring ‘The Heavy’ (copyright James Hetfield)?

Yeti Love were formed in a cafe housed within the confines of a rehearsal/ recording studio by guitarist/ cafe owner Peter Hamilton. The creative surroundings clearly rubbed off on him and he started writing songs, drafting in multi-instrumentalist Dave Sears to help put flesh on their bones and it is the combination of Hamiltons half-Spanish blood and Sears’ Celtic influences which forms the backbone of this album.

The album sidles into view with the gently weaving guitars and soft bass drum of ‘Old Man’ (no, not the Neil Young song). ‘Lonely Road’ follows and is more urgent, a flamenco inspired solo and a ghost of electronica alerting you to the fact that this is going to be an interesting trip, the variety of arrangements and instrumentation keeping you constantly engaged.

Indeed, there are muted howls of electric guitar and wails of subtle acoustic blues slide. Banjos and mandolins, spacey dubby drums and strange, clanking precussive noises. There are mellow synths and Spanish vocal codas, ethereal, wordless female vocals that recall Sandy Dennys’ contribution to ‘The Battle of Evermore’. There are delicate, haunting moments and full-blooded, guitar and harmonica Zimmerman stomps, gentle ballads you could imagine Ray LaMontagne whispering over but it is all uniquely Yeti Love.

Folk may well be the new punk but punk this ain’t! It is guitar-centric but it is delicate and soothing. What it is is almost ambient acoustic, positive and uplifting. It’s a palate cleanser, a chill-out CD – the kind of CD you put on at 5 in the morning after a wild, unplanned mid-week night at a rock club. Slumped in a cafe, nursing a black coffee and watching the world wake up – the sun rising and the night traffic cruising by, artificial lights glancing off metallic surfaces while this aural balm reminds you of your humanity after the hedonism of the night before and the onslaught of the day ahead. As Hamilton gently reminds you in ‘Dear John (We’re Human)’… and sometimes that’s just enough. This is an affirmation and a celebration and we all need that every now and then. 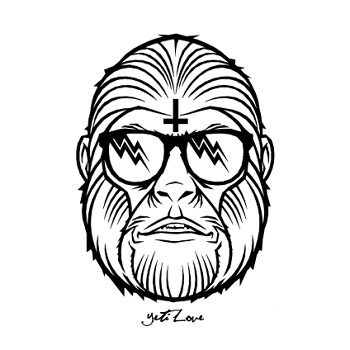