The real story here is CD1, From A Page. Four “brand new” tracks, recorded in 2010, but never finished or released. In common with the Lyon material, they were recorded by the (Oliver) Wakeman, Squire, White, Howe and Benoit David lineup, but had lain dormant until the death of Chris Squire. At that point, principal writer of the songs, Oliver Wakeman, felt motivated to complete them, subsequently working them up to a point where the other 3 gave enthusiastic approval. Karl (Threshold/Pendragon) Groom and Mike (Asia/Wetton) Pietrini added the mixing and mastering finishing touches.

And for Yes fans – at whom this is clearly aimed – the effort is worth it. Oliver Wakeman’s playing divided fans at times, but on the superb ‘To The Moment’ you can hear echoes of his father’s rippling, rhapsodic, majestic best, providing the perfect platform for Benoit David’s soaring tenor. That said, if a four track CD can be said to pivot around a single song, then that song is ‘The Gift Of Love’. Ten totally enjoyable minutes of instantly recognisable Yes, arguably a moving picture of all the musical moments visited by the band in the previous 50 years.

‘Words On A Page’ and ‘From The Turn Of A Card’ riff off the swell of Wakemen’s attractively undulating piano movements. Both are flavoured with Howe’s graceful acoustic guitar playing, gradually building them into recognisable if perhaps not the most obviously memorable of Yes classical progrock pieces.

Live From Lyon is generally accepted, even by the most discerning fan, as being a pretty solid live album. Damned by faint praise you could argue, but as a recording by an iteration of the band that didn’t last, despite its latent promise, it is the perfect fit for the material with which it is packaged. 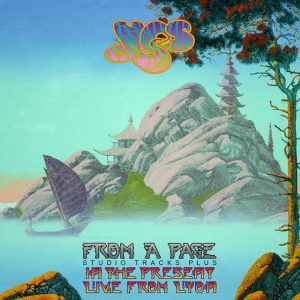 1. Owner of a Lonely Heart
2. South Side of the Sky
3. Machine Messiah
4. Heart of the Sunrise
5. Roundabout
6. Starship Trooper