At one point the godfathers of desert rock Yawning Man were one of that scenes most elusive bands and, like most trailblazers, they were often overlooked which wasn’t helped by the fact that, although they formed in 1986, they didn’t make their vinyl debut until 2005. Thankfully since then they’ve made up for lost time and a string of fine releases has led to their fifth long player: Macedonian Lines. Released by the terminally cool Heavy Psych Sounds it’s a record that melds stoner, doom and heavy rock with intricate musicianship and the result is something both powerful and ethereal.

Opener ‘Virtual Funeral’ has a dreamlike quality but it’s tethered by a distorted, weighty bassline which is rather hypnotic in its repetition. In opposition a clean guitar line paints small concentric webs which entice then ensnare the listener. Like wheels within wheels subtle changes in timbre and instrumentation, often only discernible to the attentive ear, seem to cause physiological changes and alter emotions. Macedonian Lines is not designed as background music but rather it’s an album that demands your full attention. Emotive isn’t a word that’s often ascribed to the desert rock genre but that’s certainly appropriate here, especially on the next cut, the albums title track. Close your eyes and the soaring guitars on ‘Macedonian Lines’ is akin to floating over Scandinavian shorelines or deserted deserts. A feeling of spaciousness is helped by a great production which often places the guitar and bass at opposite ends at the periphery of your speakers and a feeling of something huge and vast is created which makes for a great listening experience, especially through headphones.

‘Melancholy Sadie’ certainly lives up to it’s title with the drums and guitar working in tandem to create a circular sound that envelopes the listener and gives the feeling of a downward spiral. ‘Bowie’s Last Breath’ features a lovely fuzzy bassline that’s not dissimilar to that Sabbath rumble while ‘I’m Not A Real Indian (But I Play One On TV)’ features a luscious guitar that shimmers with an otherworldly, empyreal beauty. The epic ‘I Make Weird Choices’ brings the album to a fitting conclusion and, like much of the music contained within, it has a cinematic quality insofar as it wouldn’t seem out of place at the most climatic moment in a film.

My thoughts on first hearing this album is that a vocalist is missing. However successive spins have proved me wrong as a singer would detract from the haunting, attenuated nature of the music. A running time just shy of 32 minutes may seem a tad short to those who associate desert rock with extended jams but Macedonian Lines works precisely because of its succinctness. Devoid of bells and whistles all three instruments are brought to the fore and with tunes this good that’s exactly where they should be. 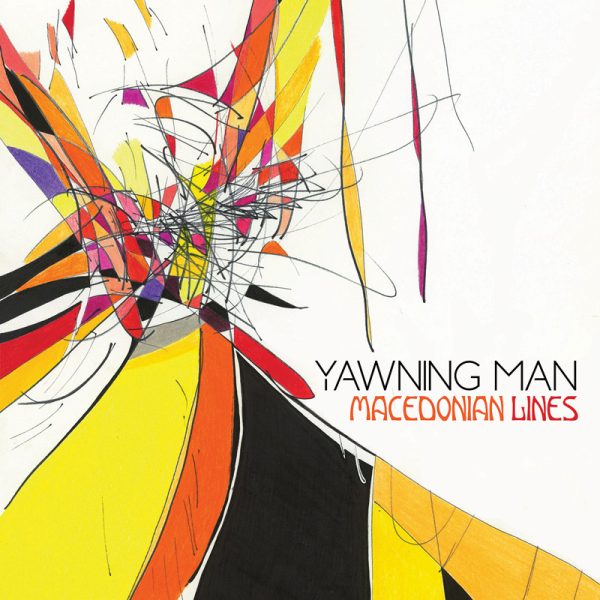