Paul Castles enjoys his introduction to Wrath of Echoes, whose new release is out on January 13, 2017, courtesy of PRC Music.

If the soulful ebb and flow generated by such luminaries as Katatonia and Insomnium strikes the right note with you then newcomers Wrath of Echoes should prove an investment worth making. With four proper songs, following on from the intro, it’s probably best to view A Fading Bloodline as an EP.

Wrath of Echoes are Canadian and are essentially made up of members from Doom’s Day and Daedalean Complex. ‘As The Sun Sets’ is a perfect instrumental scenesetter that leads seamlessly into the EP’s title track ‘A Fading Bloodline’.

The rhythm is inviting, the depth of sound dramatic and when David Habon begins to add his distinctly deep and gruff vocals it takes on a hypnotic appeal. The song has an earthy honesty about it while you could balance an egg on the smoothly shaped grooves.

‘The Asphodel Meadows’ is not quite so genial, the drums are heavier and the riffs carry a meatier crust although without losing any of the melodic atmospheric warmth. Engaging symphonic swathes really start to add further lustre at the halfway point on what is a finely crafted and compelling composition.

The vocals are mixed on ‘Weight of Time’ with some cleanly sung harmonies given room to build in between Habdon’s by now familiar fiery barks. The final couple of minutes disappear over the horizon with some well groomed guitars and keyboards, eventually falling inwards like a self-destructing mini-tornado.

The final track is the band’s own name and so very much their theme song, representing how they want to present Wrath of Echoes to the wider world. Again the Quebec quintet build up a forceful head of steam without losing any of their melancholic melodies.

A Fading Bloodline, which stretches to just over 25 minutes, is an excellent starting point for these Canadians and there’s very little not to like about this release. 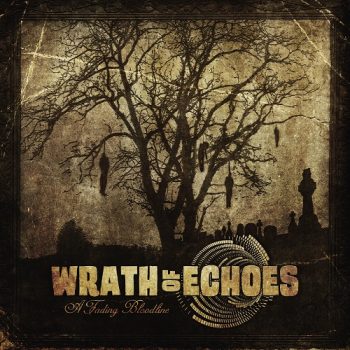