Reviewed by Brian McGowan and released by Sliptrick Records July 2018.

Tight as a drum trio, Wonderworld, stretch to a third outing. It’s not like any of them are slouches. They all double up and sometimes triple up with other bands – Roberto (Labyrinth) Tiranti on vocals and bass; Tom (Ken Hensley band) Fosshein on drums, and Ken (producer/mixer) Ingwerson on guitars, as well as being in-demand studio and live musicians variously for TNT, Dan Reed, Rick Springfield, Jorn and others.

So, you’re expecting journeyman hard rock deployed with skill, technique and commitment. We get more – we get melody, hooks and a challenge to convention as the band decry the social ills of our age and, occasionally, cry Freedom.

And we get a hard rock band who have decided that musically, they will not pursue the usual norms. Opener, ‘Background Noises’ provides an initial clue. It doesn’t quite stick to the verse/bridge/chorus template, an approach that immediately tunes you in. The call and response chorus just sneaks up behind you and hits you with a slippery, catch-me-if-you-can hook.

‘Big Word’ and ‘There Must Be More’ wade deep into Glenn Hughes waters, locking onto the rock and the funk, full of thudding, spiralling bass runs that push Ingwerson to wrench dirty, oily riffs from the rock’n’roll depths, as again they prove they are no slaves to custom. They tip the hat to Led Zeppelin on ‘Brand New Man’, with Tiranti squeezing the lemon to within an inch of its memorably melodic chorus, and Ingwerson’s axework providing the ultra cool counterpoint to the remorseless vocals.

So far, so hard rock’n’roll.

The balladic ‘The Last Frontier’ ratchets down the intensity levels, gliding along on Ingwerson’s smooth guitar glissandos, pausing briefly for a mournful and majestic solo, reminiscent of the underrated Stuart (Heaven&Earth) Smith. At 7 minutes it’s by far the album’s most ambitious piece of music here, mixing intelligent lyrics into a web of delicate chord work. Occasionally the band’s lyrics on this album don’t quite cut it, but here at least, they are looking at the stars. 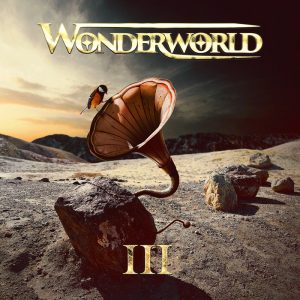