It’s all about nutshells…

Dallas stoner/fuzz merchants Wo Fat (named, rather awesomely, after Jack Lords nemesis in Hawaii Five-O) drop ‘Midnight Cometh’, their sixth album, on us and (no surprises here) it’s a big, bad, distorted doozie of a thing.

Apparently ‘There’s Something Sinister In The Wind’ and this lead track lets us know what we’re in for – namely riffs and volume and distortion n’shit. A fine Cro-Magnon chug (aided and abetted by some funky percussion) leads us into a nice loose jam until a burst of cowbell kicks us up a gear and into some heads down rockin’. The song eventually fades out, suggesting that this particular jam went on for quite some time.

Next up is the aptly titled ‘Riffborn’ – and if ever a title was a declaration of intent! “We live by the old ways, we know what came before” they intone, before namechecking ‘Purple Haze’ and dropping out into a huge, lumbering, diving riff. The band dutifully acknowledge their crusty, jamming forefathers in this veritable riff-fest. It’s a riff frenzy, it’s Keith Riffchards! It’s the white riffs of Dover! It’s ‘World Of Riff’ with a permanent ‘buy now before the sale ends’ deal! And it’s most definitely not Riff Van Winkle – there’s no napping here!

So, what else do we have? There’s the 11 plus minutes of ‘Of Smoke And Fog’, with its trippy, oozing, 4 minute intro and fuzzy Hendrix solo. It has a stoner Allman Brothers vibe about it and will probably last for several weeks live. But the jamming is smart. Purposeful. It has a Coltrane like sense of ohm about it.

‘Le Dilemme De Detenu’ heads of into stoner funk and Southern rock territory, mixing things up nicely, while ‘Three Minutes To Midnight’ is more direct. It’s bludgeoning riffery and metal distortion driving it relentlessly forward – although, this being Wo fat, they can never resist the lure of a feedback soundscape or another spacey, echoey jam.

We finish on a high (possibly literally) with the epic, bluesy, 10 minute ‘Nightcomer’. It’s Doom Swamp – a stoner ‘When The Levee Breaks’, with booming Bonzo drum breaks and looping fuzzed-up slide. There is much grooving of mojos going on here – this is some greasy, fucked up shit right here y’all. These oily hoodrats of riffs refuse to be pinned down. It’s essentially Wo Fat in a nutshell. A huge, ragged, hard jamming nutshell…I’m not quite sure what exactly I’m talking about here but, trust me, it’s a beast!

This is Wo Fats strongest release to date – heavy, loose, tight and confident. Perhaps a couple of tracks are a bit samey but that’s a minor quibble, overall this is a winner and few, if any, bands jam with Wo Fats style, enjoyment or conviction. Anyone who worships at the smoky altar of fuzz needs to check this out. 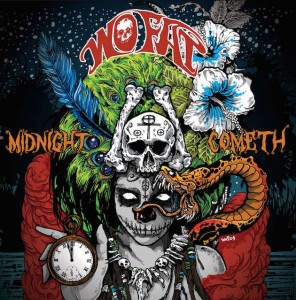