I will always remember the first time I heard Within Temptation. The track was ‘Ice Queen’ (from 2002’s Mother Earth) and it was on a free Metal Hammer CD. I hadn’t heard anything quite like it before. I was totally transfixed by the sheer drama of it all, those bombastic orchestrations and most of all by Sharon den Adel’s beautiful, soaring vocals.

Fast forward eight years and the Dutch symphonic metal maestros are back with Hydra, their sixth full-length and highly anticipated studio album. The release of Paradise (What About Us?) back in September last year enabled the fans and journos alike to get a taste of the new material and the verdict was unanimous in terms of critical acclaim. Unsurprisingly, there are those who have criticised the band’s decision to put the record out considering that four out of the ten songs are already on the aforementioned EP. WT guitarist Robert Westerholt has been quoted as saying how the album’s title is perfect as it represents “the many different sides of our music.” So, is Hydra the multi faceted aural beast it professes to be, or nothing more than some kind of monster?

I’ll be the first to admit that the whole “concept album” theme of The Unforgiving didn’t exactly set my world on fire. And I do get nervous when artists wax lyrical about “reinvention” and the like. Any fears are immediately put to bed on hearing opener ‘Let Us Burn’. Drenched in dark drama with lush, layered vocals and driving guitars this is quintessential Within Temptation at their very best. The grandiose atmospherics are all present and correct with the accompanying choir and the emotion conveyed in Sharon’s delivery has the hairs on the back of my neck shooting up. Throw a ridiculously catchy, hook laden chorus into the mix and you have nothing less than a sure-fire hit – you’ll be singing this one for hours to come.

Having set the bar so high this early on, I am left wondering if second song (and single) ‘Dangerous’ can even compare. The fact that I listen to it three times in a row should be an indication of how good a track this is. Infectious and upbeat in tempo (that speedy double bass drumming injects a fair amount of chug), ‘Dangerous’ is also the first of several artist collaborations to appear on this record. With guest vocals courtesy of Howard Jones (ex-Killswitch Engage frontman), the juxtaposition of den Adel’s angelic tones versus his masculine angst ridden harmonies creates an effective contrast. The two styles complement each other well without coming across as cheesy or too clichéd.

Which leads us nicely to the “experimental” nature of ‘And We Run’. Granted, there have been those rare occasions in music history where the worlds of rap and metal have collided in the most glorious of fashion – Run DMC and Aerosmith being the most obvious example. Unfortunately, this is not one of those moments. The song kicks off with some stripped down pianos – it’s all tinkling ivories and Sharon’s beautiful voice is offset by the melancholy of the orchestra. The other band members come in and you can feel the momentum building. And then at around 1:30 Xzibit starts rapping. Just as I am sat scratching my head thinking what the f was that, he goes on to drop this lyrical miracle – “I crush every motherfucking thing I touch!” and I die a little inside. Other listeners may disagree but for me personally, it just sounds disjointed. Like two laptops hooked up to Spotify playing two different songs simultaneously. Stick to the day job X – this is definitely a ride that does not need pimping.

Thankfully a sense of order is restored with the inclusion of former Nightwish chanteuse Tarja Turunen on lead single ‘Paradise (What About Us?)’ This is a match made in symphonic heaven with Tarja’s operatics complementing Sharon’s more ethereal vocal style perfectly. A brief yet impressive guitar solo at 3:53 combined with those richly textured strings introduces new dynamics to the table, whilst a driving rhythm section and those soaring dual vocals brings the track to a rousing conclusion. Absolutely stunning.

The pace slows momentarily with dreamy ballad ‘Edge Of The World’ before the energy explodes once again with ‘Covered By Roses’ and the bloody fantastic ‘Silver Moonlight’. Along with ‘Paradise…’ this is probably the highlight of the album for me. Chock-full of evocative melodies, thundering guitars and outstanding vocals (we are even treated to some guttural growls from Westerholt), it has all the elements of the archetypal WT classic without ever sounding tired or dull.

After the power and pomposity of the aforementioned tracks, I will admit to being rather thrown by closer ‘Whole World Is Watching’. Stylistically, it is a marked departure from the proverbial path. We are in rock anthem territory here – a slow burning ballad on which Sharon is joined by Soul Asylum’s Dave Pirner. I’m not exactly au fait with this band’s own material, but from what I’ve heard here, there is no doubting Pirner’s vocal capabilities and his gravel laced voice blends well with his female counterpart. I just wish that it incited the same level of excitement within me that the rest of this album did on the first listen. It’s the sonic equivalent of a firework without the flame required to set it off. That said I can imagine the mainstream rock world being more than happy to search for it!

With the exception of ‘And We Run’ and the confused rap / hip hopping sensibilities, Hydra is most definitely all killer and no filler with massive crossover appeal. It is a world away from the 80’s pop-rock feel of The Unforgiving but still retains the symphonic elements of past releases like Enter and The Silent Force. As Sharon puts it, “It’s the best of the old and new. Hydra really shows the multiple personalities of Within Temptation.” The band have looked back to their previous works and forward to the future – and they’ve combined the two. And even after almost twenty years together, the future has never looked so bright. Highly recommended. 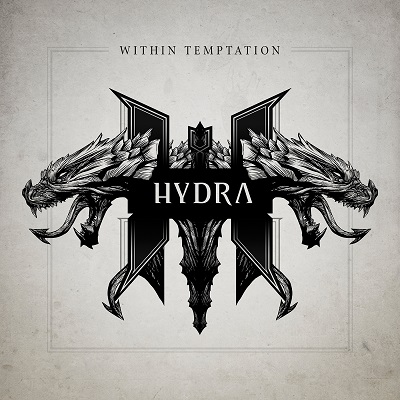 Within Temptation play the O2 Academy in Birmingham on 16 April as part of their Album World Tour.