The second album from Midlands’ doom colossus With The Dead – released via Rise Above Records on 22 September, 2017 – is so shudderingly heavy that Paul Castles is still trying to dig his way out of the debris.

When it comes to reinventing yourself Lee Dorrian could arguably teach Doctor Who a thing or two. The understated singer first registered with metal audiences when making his presence felt with emerging noise racketeers Napalm Death in the mid-80s. He then closed the door on his grind box of tricks before resurfacing with the revered doomlords Cathedral. In 2014 Dorrian again exposed himself to the process of regeneration before emerging blinking, if not quite into the sunset, with the monolithic musical manifestation With The Dead.

While the Cathedral chapter closed for good in 2013, it quickly became apparent from their widely acclaimed self-titled debut release, that With The Dead possess the qualities and wherewithal to be every bit as vibrant and vital as both of Dorrian’s previous central musical investments. Love From With the Dead is their sophomore album on which he is again accompanied by former Electric Wizard and Ramesses bassist/guitarist Tim Bagshaw. Things have evolved though in the intervening four years, notably Alex Thomas (ex-Bolt Thrower) picking up the sticks left by Mark Greening after he upped and left fairly quickly on the heels of their first album. Finally, With The Dead are a trio no longer, as the arrival of Leo Smee (ex-Cathedral) on bass now makes them a quartet.

Ten minutes in front of the 6 O’Clock news is usually enough to moisten tear buds if not in sorrow but with the sheer frustrations that stretch painfully across our planet, whether it’s massive challenges such as climate change or on a smaller but more personal scale someone spending an icy night huddled under cardboard in a shop doorway.

It’s these problems, and any one of hundreds of others like them, that preoccupy Dorrian and his three like-minded compadres on this album on which again raw emotions are dragged down further than a village well. But drop the bucket down and it’s not water that you’ll find in your creaking recepticle, but despair, as perfectly encapsulated on the grindingly morose album opener ‘Isolation’, a pounding mind-numbing track but one that perfectly captures the empty void that so many have in their lives.

There’s a slightly pacier feel with ‘Egyptian Tomb’ but before long Dorrian’s caustic bites are snapping at your heels like a recalcitrant pup as Smee’s smoglike bass lines maintain a filthy chug while the drums maintain a head down constant throb. 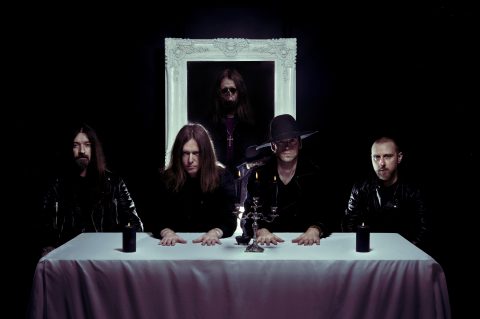 When former parts of groups, especially successful ones, merge to form new creations the tag of ‘supergroup’ is invariably nonchalantly tossed in their direction. Fortunately the overriding quality of With The Dead’s debut album, and the pained poignancy of tracks such as Crown of Burning Stars, ensure that Dorrian’s new band do not fall into any such traps. Dorrian continues to forge ahead with a creative and supercharged outfit that could yet go on to emulate the likes of Cathedral who bestrode the UK doom scene for two decades.

‘Reincarnation of Yesterday’ is heavier than your local diet group the first week after Christmas. You almost need a truck to wheel it in, such is its unforgiving merciless attitude. The title gives the game away with ‘Cocaine Phantoms,’ which, a bit like Usain Bolt in his prime, takes a while to get fully into its stride. The initial phase sees it bent over like Quasimodo, which is not altogether surprising as the slow but punishing discourse is akin to carrying a sack of spuds on your back up a hill. But gradually it gathers stature, if not quite matching the Jamaican legend for speed of course.

At 10 minutes ‘Watching the Ward Go By’ is the second longest piece and starts with an uneasy eerie feel as though coming from within the walls of a sanatorium.  After a dusty intransigent drone casts a crippling shadow for nearly six minutes the dustclouds are finally cleared by some razored riffage over which Dorrian rages as though he’s inside one of the padded cells with no immediate prospect of being let out. It’s frighteningly bleak and while far from a comfortable listen you can’t help but be impressed by the sonic depths to which With The Dead plunge. This is not so much into the abyss, as out the other side, and still no light at the end of the tunnel. Hell – even the fucking tunnel has done a runner!

The claustrophobic feeling is maintained through the stifling ‘Anemia’ which again reaches out into the darkness, driven by some barbed wire riff patterns that are sharp enough to draw blood. Dorrian’s vocal style is preacher-like, a storyteller let loose, although not the kind you’d want to book for a child’s birthday party. In parts he has more in common with Nick Cave or Lou Reed, the same immersive morose moments that don’t so much as tug at your heartstrings as rip them out altogether. The fixation with death on this album is sufficient to make your local undertaker seem like the Fun Factory, and Dorrian’s cover model certainly appears well past her sell-by date. 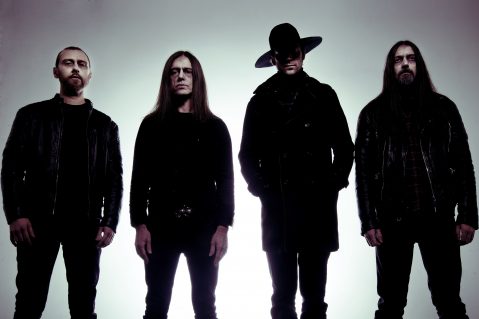 At first glance you may be forgiven for thinking that final track ‘CV1’ is Dorrian’s personal crusade to get Britain working with some handy techniques to update your CV. Those familiar with his West Midlands roots will of course recognise this as the central postcode of his home city, and this epic 17 minute closer is his homage to just that. There used to be a saying about ‘Being sent to Coventry’ – now you can just play them ‘CV1′ instead.

Unfortunately if the Coventry Tourist Board were hoping for a timely injection of visitors on the back of this song they are likely to be sorely disappointed. In fact anyone listening to Dorrian’s personal penchant to his place of birth is unlikely to be booking a weekend there any time soon. It’s oppressive, intimidating and clearly the city’s fathers have not impressed Dorrian as he cries…”through this place I roam, Oh what became of home’. There is a certain irony that the city’s biggest tourist attraction is the skeletal cathedral, or what remains of it after the Luftwaffe did its damnedest in the aerial bombardment of November 1940.

As with the band’s first release, the follow-up is again on Dorrian’s own Rise Above Records with Jaime Gomez Arellano conducting proceedings in the studio. With The Dead have created a work of elephantine proportions, in places so unbearably heavy as to be off the scale completely. Emotions are put through the wringer and then taken out and squeezed until they’re begging for mercy, as Dorrian surpasses himself with bereft compositions that pull your senses apart before restructuring them, although quite possibly not in the right place. Love From With The Dead will send your soul scurrying for cover. 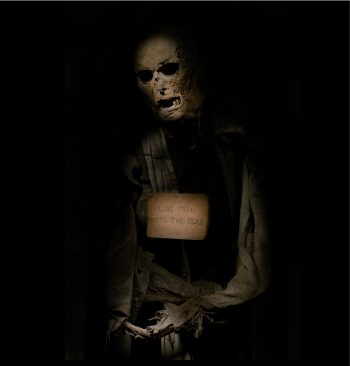