When it comes to doom metal of the most epic proportions French band Witchfinder tick all the right boxes. From the distorted downtuned guitars and thunderous drums to the tortured vocals and thick sludgy sound Hazy Rites is an album of monolithic proportions that packs a weighty punch and often leaves the listener feeling dwarfed beneath its brutalist enormity. This album follows their 2017 self titled debut and while that was a solid outing their sophomore effort is a major step up in class. Almost double the length of their eponymous record and with only one of the tracks clocking in at under seven minutes everything about Hazy Rites screams “mammoth”. It’s a fusion of sludge, psych and stoner that’s all wrapped up in a heavy, fuzz drenched sound and this is an album that will appeal to fans of Conan and Kadavar and should attract Witchfinder many new admirers.

Released on April Fool’s Day yet Hazy Rites is certainly no joke. There’s a sinister undercurrent to the bands sound that was pioneered by Black Sabbath: it’s that moment in 1970 when the hippy dream turned into a bad acid nightmare and Witchfinder perfectly capture that zeitgeist. First salvo ‘Ouija’ opens with a chugging, humongous riff which is joined by the bass and drums that hit with the force of planets colliding and a wall of noise is created that totally entombs the listener. Replicating the feeling of being sucked into a void the vocals have a definite Windhand feel. Imagine Ozzy jamming with Monolord and you’ll have an idea about vocalist Clement’s agonised squeal. Witchfinder operate as a trio and there’s something about three piece bands that’s condusive to making a huge sound (think Motörhead and Vodun). Exposed and with nowhere to hide each instrument must come to the fore and in Witchfinder each member jostles for their place in the spotlight.

Next cut ‘Satan’s Haze’ opens with another monumental, lumbering riff that sounds like a rockfall, hypnotic in its repetition, which then metamorphoses into an ethereal guitar solo until warlike drums herald the return of the riff. The band are in no hurry and allow the songs to develop organically with the solos in particular given room to roam and explore. Yet, rather paradoxically, despite the free form nature, the songs often create a feelings of claustrophobia and foreboding. This is most evident on ‘Covendoom’ with a throbbing bass that’s akin to an anchor tied to a drowning man, it continually drags the listener down to unexplored depths. Like two elephants rutting ‘Sexual Intercourse’ picks up the pace a little with a really catchy riff and a pendulum swing (like Tony Iommi at his most effervescent). In doom terms it fairly trots along and it’s this variety that prevents Hazy Rites becoming staid and descending into geneticism. The sorrowful ‘Sorry’ follows and brings down a whole world of crushing darkness before ‘Dans L’Instant’ brings the album to a close in a befittingly epic fashion. Like a penny dropped in treacle it crawls along, add some antiquated organ and echo soaked vocals and an ominous ending offers little light or redemption.

Hazy Rites is definitely an album for doom purists; it’s a record that seems to exist in a vacuum and is totally devoid of any cross genre pollination. However it’s not just for doom heads: anybody who has revelled in monstrously fuzzy guitars and colossal power chords will find a spiritual home in the sloth like Hazy Rites. 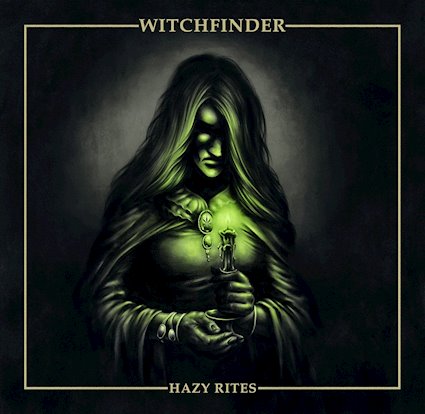