1984. First album recorded and ready to roll. Label (Elektra) shelves it. Wise man at Grand Slamm Records buys it, licenses it to Japan and Europe. Overseas success encourages an eventual US release.

An ignominious beginning for White Lion, born of the pop metal, bandana rock generation, but clearly with ideas and ambitions above their station.

While their peer group were pouting and swaggering around them, White Lion were talking up issues, large and small. From broken nations (Cherokee) and broken hearts (…er, Broken Heart), to war dead (All The Fallen Men) and more war dead (El Salvador). Worthy, yes, but unlikely chart material you would have ventured. Even the title track was a narrative on the socially marginalised.

Still, Mike Tramp’s lightly accented voice gave his vocals subtle inflections that are instantly appealing. And Vito Bratta’s guitarwork made all axe freaks swoon and cheer in equal measures. He can shred with the best. His guitar bites and wails through ‘In The City’ and ‘Where Do We Run’, and his Flamenco styled intro to ‘El Salvador’ along with the rising and falling chord work on the title track show a prize winning skill set that was yet to be widely recognised.

It’s unclear just how much influence producer, Peter Hauke had on the recording. Little has been said since. One way or the other, the band learned from Fight To Survive‘s poor commercial performance, and used all that they had discovered about themselves, songwriting and the recording process on their next album, Pride.

Giving us some sense of evolutionary perspective, the bonus (live) tracks on this reissue (on US label, Cleopatra Records), are all taken from the the 18 months the band spent touring the Pride album. They opened for Kiss, Aerosmith, Stryper and AC/DC. Their star was most definitely in the ascendant.

The biggest songs from the album – ‘Wait’ and ‘When The Children Cry’ – are absent of course. They are for another day.

On the other Pride tracks here, Tramp’s lyrics now avoid the pitfalls that trapped them on the debut album. The bracingly lustful ‘Hungry’ and the paean to teenage dreams of ‘Tell Me’ are the picks. No potboilers these, both are rock solid rock songs, aggressively melodic, lit up by Vito Bratta’s sizzling arpeggios, blazing brightly in the night air, boosting the temperature in the venue to unbearable levels.

And the crowd turn up the noise accordingly. 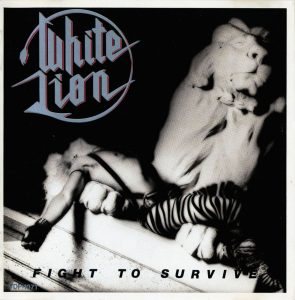