From the darkness, the glint of gold sparkles from his shirt as Troy Redfern heads stage front. Stetson worn low, six-string guitar in hand, his guise as gunslinger from some modern Spaghetti western directed by Tarantino attracts audience attention. 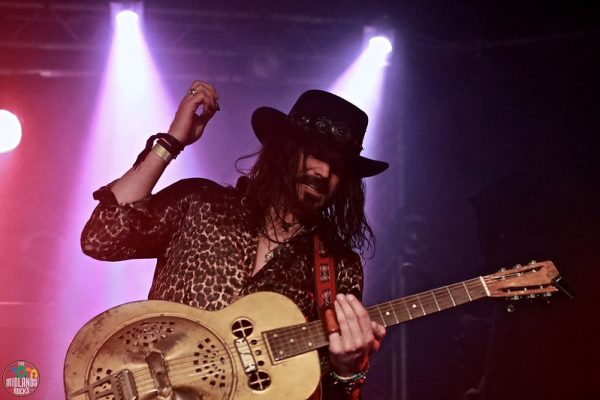 Fittingly, he sings of how “the tables are turned” and escaping down to Mexico in opening number ‘Scorpio’. He roams the stage, striking poses, wielding his slide to dramatic effect. A doomy blues rock cover of ‘John The Revelator’ follows, then ‘Waiting For Your Love’ struts out loud in a harsh boogie manner while the riffed-up ‘Sanctify’ has more of a good-time fun feel, both tipping their hat coyly towards the late Marc Bolan.

Completing this opening set, Redfern invokes the devil with a Southern Gothic take on ‘Voodoo Chile’, awash with dextrous slide, feedback and more. He leaves the stage having made an impression on many. 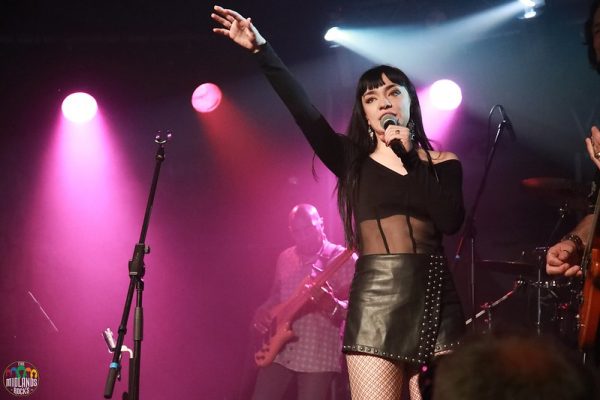 The Asylum is busy tonight, reassuringly so, and not just because of the fine weather, When Rivers Meet have made a lot of inroads since coming but recently on the radar. A handful of Blues awards already on the sideboard, husband and wife team Aaron and Grace Bond delivered entertaining support sets on tour with King King between covid lockdowns. There the duo entertained folk, both singing, he playing guitar and she also handling mandolin and violin. This time, they’re headlining, and it’s going to prove interesting to see if they’ve got what it takes to impress over a longer set.

As noted, there’s a sizeable audience here, and of all ages it must be said. Intimacy is one thing, now there’s a need to go over big. To this end they have employed a rhythm section in bass player Roger Inniss and drummer James Foxy Fox (who’ll also infrequently play keyboards) and the precision of their playing informs that they’re seasoned sessions musicians, but it’s the overall boom and ambiance they help create is what’s most important.

They hit the stage to wind sound effects and white lights flashing on and off, possibly intended to evoke some storm in a countryside impression and add to the character of their chosen group name. Either way, inner city Midlands-men and women gather with those from as far afield as the Black Country are intent on letting the weekend begin here as with big beaming smiles on their faces the band launch into a euphorically delivered ‘Did I Break The Law’.

The front line’s confidence has grown, Grace Bond’s in particular as she works both stage and audience, her vocals soaring high and expressively. Picking up a mandolin as Aaron lays down slide guitar lines they sing ‘Walking On the Wire’ collectively, amid big hefty drum rolls. The mood changes again, they dig deep into an early number, ‘My Babe Says That He Loves Me’ opening in a heavy folk-rock manner becoming a sexually charged frisson of sound as Aaron syncopates chords and Grace screams out the song’s title lyrics, her shaking body dancing across the stage. Next up, ‘Battleground’ comes across like The Mission playing the blues. 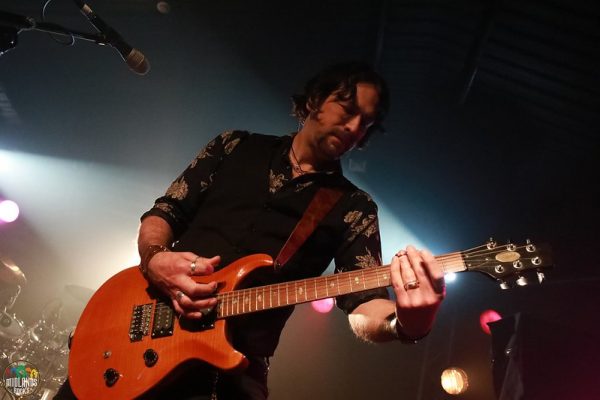 So far, little let-up. Rather than worrying that the Bonds’ constant Cheshire cat grins are the effects of illicit substances, we find them endearing. “We have been so excited about this tour – I can’t tell you!” she exudes. Still, a few calmer moments ensue as Aaron straps on an acoustic, the pair exchanging vocals on the early 60s sounding ballad ‘Don’t Tell Me Goodbye’… Done with tender moments, they stomp back in with ‘Free Man’!

They tell us how they met in a pub, some 18 years ago (both wear their presumed age well), and when they began writing songs, decided they’d try not to pigeonhole their sound. To this end we get the strutting Zeppelin-styled rock of ‘Lost & Found’, Innis’ effects-driven bass augmenting Bond’s slide solo as the number progresses. Not too far removed, comes the cigar-box guitar boogie of ‘Innocence Of Youth’, as Grace works the stage, her voice rocking and wailing away ever higher the music shifts towards beefy 70s Stones rock.

With just acoustic and close harmony voices, the pair stand at a single microphone to offer us the wistful murder ballad ‘Bury My Body’; not satisfied with making this the only other slow rock tune to feature whistling other than The Scorpions’ ‘Winds Of Change’ Grace picks up her violin and solos. The song over, as she proceeds to place the violin down, he gently reaches out to her, placing a kiss on her lips. The crowd applaud the loved-up couple, their attraction for each other as they look admiringly and flirt with each other, life-affirming and more entertainment than the recent batch of rom-coms Netflix has offered us. As Fox stands to play electric piano, the offer us another early tune and ballad in ‘Tomorrow’, to be followed by the more ethereal ‘Friend Of Mine’. 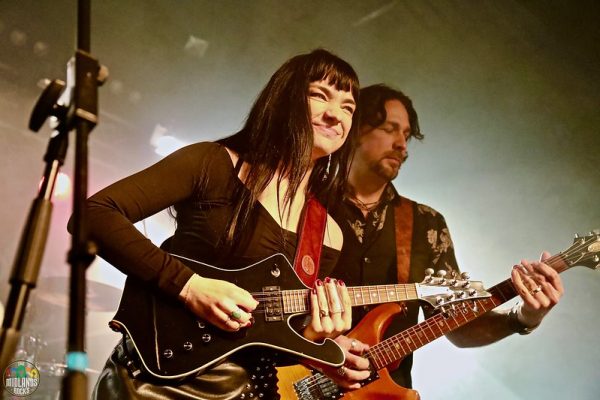 Easing gently back towards Zeppelin stately pomp and ceremony we get ‘We Fly Free’ – The band raising hellfire blues on stage, it takes a while for me to realise I can still hear a female voice singing but can’t no longer see anyone wearing a mini-skirt on stage. “Anyone seen my wife?” calls Aaron after she’s been walking through the audience getting them to join in for the last few minutes. The music continues as he helps her back on stage, and following Fox’s drum solo, bass player Innis moving from out of the shadows to offer Bootsy Collins’ p-funk, before band collectively rock the song to its conclusion.

Following number ‘He’ll Drive You Crazy’ may come across as a little incongruous after all Aaron Bond’s gentlemanly action thus far, but as slinky-sliding blues rock it works, and the rhythm sections’ session credentials become ever more evident in their preciseness, Grace again taking up violin during proceedings and Aaron delivering crunch-funked riffs as it reaches its conclusion. ‘I Can’t Fight This Feeling’ is similarly violin-injected, playing at the heavy end of blues rock, with a certain similarity to something called ‘Whole Lotta Love’ in its riffing. Staccato chords lead into riff rundowns over blues belting ‘Kissing The Sky’, this time round Grace soloing mandolin. “Birmingham, you’ve been amazing!” she declares, trading mandolin for violin as the couple pour on the lust factor once more both singing ‘Want Your Love’, band pedalling and thundering along in equal measures before an extended instrumental session has the violin steering us briefly down those folk-prog corridors both Curved Air and The Horslips have explored in the past before bigging-up into full scale rock mode, a collective audience with hands raised above their heads clapping and bawling out lengthy “whoarh-whoarhs” until a singular pitched scream from on stage has When Rivers Meet climax triumphantly.

Returning to encore, still apparently in a state-of shock this audience has given them, Grace asks: “Are you sure?” and they offer us ‘Never Coming Home’ delivered with Thunder-like swagger with a smattering of Mott in the hooks.  “We’ve time for just one more,” we’re informed before the bright anthemic guitar chords of ‘Testify’ prove they’re still running high on adrenaline.

It’s proved a rewarding experience watching the Bonds move from cottage industry to something potentially special. Their hard work has captured lightning in a jar, and are ceasing the moment; a joyful experience demonstrably shared with the audience gather here tonight.