Recently, I had the pleasure of catching married music duo Grace and Aaron Bond, otherwise known as When Rivers Meet, as special guests on King King’s winter UK tour. My partner-in-crime attending that show was even more impressed, and I cautioned that good things in small measures might best be how to view them.

Such criticism flies in the face of past evidence of course. This spring, they set a record, becoming the first act to win four UK Blues Awards, alongside being voted Planet Rock’s Best New Band. I love the blues, and their rootsy take on it is appealing, my caution was based on the fact I found their debut album, We Fly Free, if not quite pedestrian, a little too predictably rudimentary in the rhythmic stakes. Live, with a short set and the added attraction of them being an engaging attractive couple such shortfalls weren’t felt.

Pleasing then, that they already had in the can a second full length work that expanded on the original template and for the most part diversified from previous four-to-the-floor fundamentalisms. Time, money, experience and the expansion of what will be a five-piece live band seem to be the key elements at work. That, and the accolades they’ve received has boosted them creatively, the material offered is more diverse, and decidedly heavier in some places.

Evidence of this is found on opening track ‘I Can’t Fight This Feeling’. Its distorted staccato guitar riffs beckon back to Hubert Sumlin but are given a sideways shift of sonic six-string screaming of the kind Mr Jimmy Page used to produce, albeit tempered in their outpourings. These are issued by the male half of the duo, the other party responds with a measured no-mood-to-be-messed vocal delivery, as statement of intent; and whether that passion is for music, or her lover remains ambiguous.

In contrast, chords strum with a melody as if picked from the charts of yesteryear when ‘Never Coming Home’ begins. A feeling of change for the better is outlined as its sixties’ songbird quality adds harmonies, the infusion of organ and while having a bluesy quality, that’s deferred in favour of composing a song rather than sticking to a genre. A little later, ‘Don’t Tell Me Goodbye’ shares a similar feel, sauntering between pop, folk and Americana with strummed electric and keyboards in evidence. The narrative flow, as each take a vocal line, holds your attention, then duetting in the chorus. ‘Have No Doubt About It’ is the third hand in the deck to feature a sultry almost 60s shifting shuffle groove – Modern listeners might make comparisons to Amy Winehouse, I say opt for a bluesy Dusty Springfield, as Grace espouses a variety of moods, crooning and a wailing but generally just being an impressive chanteuse. She also plays violin on this one, it seeping in gypsy-style then nicely building into a flaming cache of sound near the end, as Aaron joins in vocally, the song beating hard, with each unrelenting in their promise to see each other every night.

Those lighter numbers are interspersed across the album. In between you get the likes of ‘He’ll Drive You Crazy’ where they return to their bluesy roots but sounds all the fresher for being diverse – From rocking violin lines, to treated vocals coming across like old 78’s wailing away, it concludes as hell-thrashing stomping blues rock.

‘Do You Remember My Name?’ is where the late Robert Palmer might’ve met a laid back Yardbirds. It ruminates over a quite slow rhythm but is allowed to breath via slide mandolin. It is subtle, sexy and just that little bit dangerous… This despite being a song castigating those who show no faith in you. ‘Eye Of A Hurricane (Friend Of Mine Pt. 2)’ is a slow creeping blues, there’s almost a whisper on the wind of Band Company about it. Aaron takes the lead vocal role here, Grace joining in with a high melodic wail. The friend with me at their live show compared her voice to Siouxsie Sioux’s, and it does share a similar tonal quality and pitch range though as a tunesmith she applies it very differently.

‘Testify’ was released as a single. Based on its title one might expect it to be gospel invested, and I can confirm the use of organ plays close to that theme, however the harsh driven rhythm guitar sound is more akin to garage punk rooting it in a less Everglades-inspired mode. More so, and with each passing chorus an earworm grows larger as Grace Bond’s voice belts out soulfully in high register. Coming on like wild west shootdown… or a knife-primed cat fight in a pool hall, is ‘Shoot The Breeze’. Slow, not quite sleazy, grungy 12 bar blues. There’s a noticeable Zep riff at work on ‘Lost & Found’, the way the drums connect to it too, and while the lyrics might mention angels there are nastier things at work here. The music then goes lopsided, heavier and with an unexpected freaked-out bass coming into play, then come the climax some hefty “Hey, hey!” choral shouts as she sings on repeat “Run for your life!”

If that’s a warning, comfort and safety Is revealed in bedsit blues acoustic number ‘Talking In My Sleep’. They sing songs about being soul partners, and we get to share in their intimacies. The cynic in me tells me not every day’s full of wine and roses, but I think we can allow a while before they get too confessional and air any dirty laundry.

That gentle tranquillity is echoed in the opening segments of ‘Make A Grown Man Cry’ where a bird is heard singing in a tree, only for driving, distorted slide heavy rock to ensue. Here the lady matches man, belting out hotblooded and empowered the way Ann Wilson used to do back in the day. Then, it stops suddenly, just as you expect a guitar solo. If it’s intended to keep ‘em wanting more, it works.

For me this is several steps up from their first outing. When they go out as a full band in the new year the songs are going to take on an added life, and a longer set be one worth hearing: just like this album. 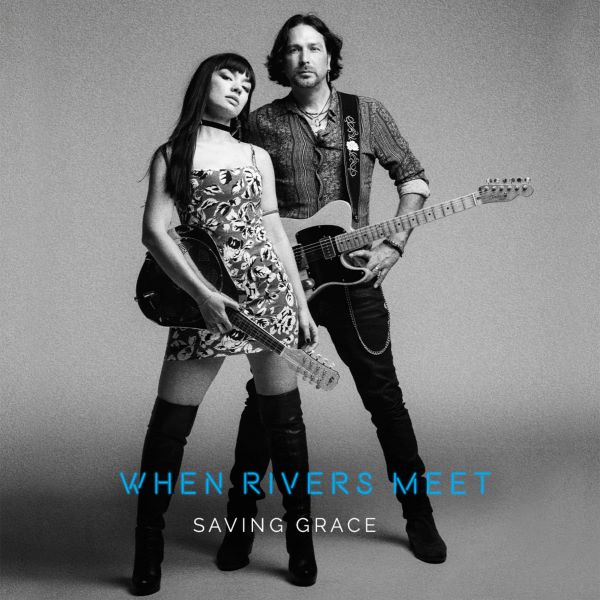