So, if you spent yesterday living in a cave you may have missed the fact that Weezer sneakily released an unannounced covers album online. Certain sections of social media lit up with shock, surprise and a fair amount of joy. To say this was unexpected is an understatement, particularly as their latest album release (The Black Album) is only just over a month away. So, enough yakkin’, let’s investigate.

First, a bit of history (this is an album with a story). In late 2017 a Twitter account appeared (@weezerafrica), its sole intention to convince Weezer to record a cover of Toto’s ‘Africa’. It pleaded, cajoled, begged and meme’d until Weezer eventually trolled him by releasing a cover of ‘Rosanna’. Toto then joined the party, trolling them both by releasing a cover of Weezers ‘Hash Pipe’. So far, so brilliant. And then yesterday – Boom, their fifth self-titled album (they are all denoted by colours, this one being, you guessed it, teal) a 10 track album consisting purely of cover versions.

Covers album often have a reason, a theme, an agenda. This hasn’t. It’s purely and simply 10 great songs – no deep cuts, no obscuro’s, just 10 songs everyone knows off by heart. Got a cheesy playlist somewhere? Pretty much all of these songs will be on it. There’s no detonation and reconstruction of songs here, Weezer just play it straight and that’s their masterstroke.

We kick off with the track that started it all and it’s a blinder – played with love, respect and a shedload of guitars. The harmony vocals here (and throughout the album) are wonderful, it’s sure to become a live staple! It’s followed by a faithful rendition (again with added guitar oompf) of ‘Everybody Wants To Rule The World’. They’ve set out their stall and now we’re off and running.

So, let’s take our cues from Weezer and blast through the rest of it. ‘Sweet Dreams’ eschews any of Marilyn Manson’s dark, sinister sleaze interpretations and reclaims the song as a synth pop gem. ‘Take On Me’ is rocking – propelled along by Patrick Wilson’s drums and even that high note is hit! Brummies are well represented too – ‘Mr. Blue Sky’ is as joyous and jaunty as Mr. Lynne’s original, capturing its bonkers ambition and grandeur while still managing to dial up the guitars to maximum fuzz, while ‘Paranoid’ (yes, ‘Paranoid’) is torn through with balls-out energy and crunch.

They also tackle RnB. Their take on TLC’s ‘No Scrubs’ (don’t know it? Google it, you will know it) is fast becoming the albums most talked about track. The song is twisted inside out and turned into a kind of frat boy, glee club romp (but fear not, fuzzed out guitars haven’t abandoned us). There’s no irony involved here, they’ve covered it ‘cos they like it – and it works! ‘Billie Jean’, meanwhile, is layered with mondo guitaro and turned into the funk rock beast it always wanted to be while Ben E. King’s ‘Stand By Me’ is given a modern production sheen, distortion, and morphed into a long lost AOR classic.

And as soon as it’s begun, it’s over – and you’re left beaming like a fool. It’s the best covers band you’ve ever heard roaring through a set list to die for. More than anything it’s a tribute to the art of writing a great song, a joyful reminder that if a song is good, it’s good, regardless of what label it’s given. It’s a quietly revolutionary theory in these times of multiple genres and sub-genres, and how dare anyone cross those demarcation lines! Well hey, fuck you cliquey kids – it’s music, enjoy it, that’s what it’s there for!

This continues Weezer’s recent resurgence. It’s a great album, brilliantly performed. Simple as that. Special mention must go to Rivers Cuomo for his vocals – he tackles everyone from Ozzy to Michael Jackson to Annie Lennox and nails them all without sounding like an impressionist – no mean feat! If there’s a more innocently enjoyable album released this year you can tie me up and flog me with a wet Sea bass! 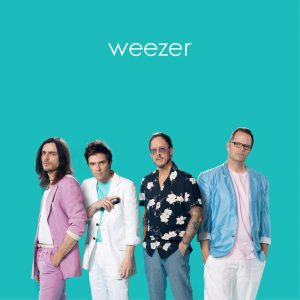