MR: So Roger thanks for talking to Midlands Rocks, how pleased are you with your debut EP under the Kinjiru name?
Roger: Thanks for inviting me to talk to you, I really appreciate it. I am really happy with the EP as it was a real challenge to write, record and release the whole thing by myself. Being within a bubble like that, you don’t have anyone else to bounce ideas around with, so I was immensely relieved when I started to get positive feedback!

MR: Are these four songs all brand new or are they things you’ve had up your sleeve for a while?
Roger: Nope, all totally new although I have dabbled in with metal / dance crossover stuff before.

MR: Were there any issues in the studio or did things run smoothly?
Roger: Well, I have my own recording setup at home so the main problem is having too many distractions like games consoles, TV, etc…

MR: Plenty of artists juggle two or more projects but perhaps not quite so diverse as Kinjiru and your band Demons of Old Metal?
Roger: Yeah, they’re pretty different aren’t they? I guess it was a good chance to flex some different musical muscles and experiment with rhythms and sounds that wouldn’t work in the Demons format.

MR: Was this something gnawing away at you that you felt compelled to do?
Roger: Maybe not gnawing, perhaps nibbling is more accurate LOL :-) I was definitely starting to feel a bit confined, so the Kinjiru project was a good outlet for that.

MR: The metal/electro mix is not a musical marriage that you come across too frequently?
Roger: No, and that surprises me because they are two high energy forms of music compel people to move either part or the whole of their bodies in time to it (I could have just said dancing but I’m not sure moshing or headbanging come under that umbrella!).

MR: Were you always a fan of both genres growing up or is the electro taste something that you’ve developed more recently?
Roger: Okay, guilty secret – I really enjoy cheesy pop music, always have. In my defence, if you listen closely to a lot of those kind of songs, the production is generally fantastic and you can learn a lot about how to layer tracks.

MR: Are there any prospects of a live show from Kinjuru?
Roger: I would love to take this out live, it’s just that with the size of the line-up needed, I am not sure how many venues could fit everyone on stage! It would be two guitarists, me on vocals only, bassist, drummer, keyboard player, possibly a percussionist and maybe even a backing singer! 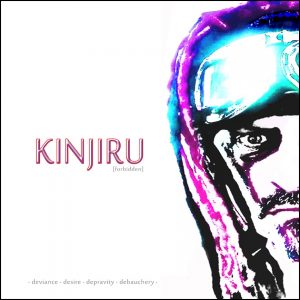 MR: Is the intention now to continue to juggle these two projects in tandem or are Demons of Old Metal on an extended break?
Roger: Yes, sadly the circumstances that led to Demons needing to go on hiatus are still in effect but we have all agreed to never say never!

MR: All four songs on the EP have a sex theme, your specialist subject, I guess?
Roger: It’s certainly a subject I’m fond of, but I wouldn’t want to go on Mastermind and answer questions about it ha, ha. I think it’s such a diverse area of human life yet it still has the ability to shock or make people uncomfortable. I honestly never thought I would be including Furries or strap-ons in lyrics though LOL :-)