One of the giant rock bands of today…

The release date of We Are Harlot’s new album is a time in which nervous Danny Worsnop fans have been chewing their black painted nails in anticipation for. After announcing that the frontman will be leaving his eight-year-long career in the well-established metal group Asking Alexandria to pursue a career in hard rock, many took to twitter to express their devastation of how their lives have now ended, some fist pumped the air in joy and others simply shrugged their shoulders and said ‘Do I even care?’

Whichever of those reactions you had after hearing the news, We Are Harlot prove to defy ever critic’s snobby prediction that Worsnop’s decision to abandon his brothers in Asking Alexandria would end his success as a musician. The album offers a concoction of typical hard rock stories; from heartache to wild nights out at the strip club that get somewhat messy to say the least, the band’s self-titled piece is definitely a spark that may just be enough to ignite the flame of rock that has been lost among the long list of generic metal bands in today’s industry.

Unless you’re a nun that hasn’t left the convent since your 18th, it’s almost impossible to resist the urge of downing a bottle of JD while bobbing your head to the album’s most memorable tracks, ‘Dancing on Nails, ‘Denial’ and ‘One More Night. Danny’s voice simply oozes originality as he effortlessly reaches the high notes with a rasp that probably neither you nor I could adopt without smoking 50 a day; it’s nice to see him showing off his true mature range rather than screaming down the mic as we’ve seen so often during Asking Alexandria. With a combination of choppy drum beats and solos that I’m pretty sure leave scorch marks on guitarist Jeff George’s guitar, these ball breaking anthems really let everyone know that this band mean business.

While the majority of the album illustrates the rock n roll lifestyle that We Are Harlot seem to conform to, there are occasional blasts of reality in tracks such as ‘Someday’ and the album’s last song ‘I Tried’. Although they break up the album rather well, I can’t help but cringe slightly at some of the lyrics in between shedding tears into my now empty bottle of Jack Daniels and wince at the sudden key changes that somehow I can never adjust to. However, with that being said, could a hard rock album be complete without these ballads? Ballsy. Bluesy. Bloody Brilliant. We Are Harlot bring a well overdue sense of originality with their songs and make it incredibly clear that this is only the starting line of their race to become labelled as one of the giant rock bands of today. 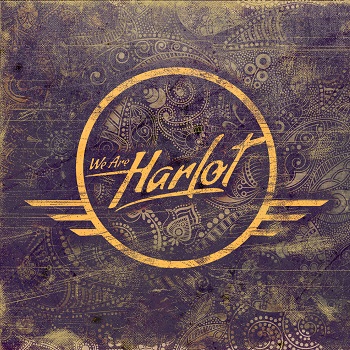