If we were to list the Grammy and Emmy nominations earned by the the producers and songwriters featured here – David Foster, Burt Bacharach, Tom Snow, Tim Feehan and more – we’d have no space left to talk about the album. Their songs are the building blocks of Original Demos, another gem from specialist label, Contante y Sonante, in the genre best known as Westcoast Rock.

That said, the focus is as it should be, on the late Warren Wiebe. His awesome vocal talents were revered in the industry. He was always first choice when one of these writer/ producers needed to commit a song to tape for the first time. Either preparing for an album or simply as a way to take the songs to market.

As the title indicates, this album is a collection of (high quality) demos, recorded by Wiebe, curated by the C&S label chief, Gabriel Raya, who should be rewarded for his tenacity and patience in tracking them down.

David Foster, the “master of bombastic pop kitsch” wrote the first two tracks here. The first, for Celine Dion – ‘The Colour Of My Love’. The second, ‘Live Each Day’, was pulled from the Foster vaults for Contante Y Sonante’s 2009 album ‘Fly Away’. And you get what you expect, assuming you expect to hear memorably melodic songs adrift on a sweep of gilded strings, grand piano and plucked guitars. The perfect backdrop for the fragile, soulful lilt of Wiebe’s golden tones, soaring above the fray, heaven bound.

The MOR sheen of Burt Bacharach’s material always hides demanding melodies. Yet Wiebe sales through his ‘Never Take That Chance Again’ and ‘Love Made Me Wait’, negotiating the unexpected key changes and shifting time signatures with an apparent economy of effort. Yet another reason why Wiebe’s name was always on a short list of one.

His vocal range is rare if not unique, meaning that his baritone can glide gracefully through Steve Dorff’s velvet lined ‘A Little Thing Called Life’, and that his tenor can find traction on the slopes of Tim Feehan’s vertiginous hook on ‘Don’t Tell My Heart’, just as readily.

The release date of this album – 25 October – is significant. Wiebe died on that date in 1998. You could have understood that had he still been alive, he’d have made a career trading in the glory of these originals. His vocals had a sense of gravitas – a mix of Peter Cetera and Stevie Wonder – that was beyond other vocalists in the genre.

Original Demos is a fitting epitaph, and a cause for celebration. Memories of a man who’s sorely missed. 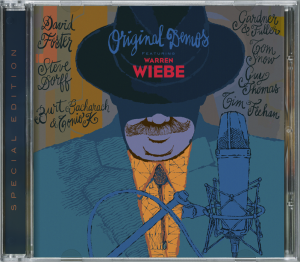