Some bands are so far ahead of the curve that time is yet to catch up and that’s certainly the case with Warfare (interviewed here). Their sound, a perfect admixture of punk aggression and metal riffage, was the pre-cursor to much extreme music and both black metal and thrash can trace their roots back to Tyneside’s finest noise merchants. The aptly titled Songbook Of Filth collects a host of rare and unreleased tracks to illustrate why Warfare were, and remain, true pioneers.

While bands like Motörhead and Venom had already incorporated elements of punk into their sound Warfare took the amalgamation to a whole new level and the result was truly earth-shaking. That Warfare straddled both genres so effectively shouldn’t come as a surprise as drummer and frontman Paul ‘Evo’ Evans originally plied his trade in bands like Major Accident and Angelic Upstarts and that’s just the aesthetic he brings here. It’s the heaviest metal you’ve ever heard only with street level lyrics adding a gritty edge; there’s no abstract sword and sorcery stuff here and that only adds to the overall feeling of brutality. Case in point being opener ‘Black’ which arrives like an irradiated warhead and proceeds to lay all to waste. ‘Black’ is a new track that’s sits easily alongside older thrashers and deals justice upon dodgy priests, yet for all its sonic fury there’s a strong groove present which ensures it swings like a wrecking ball and, heavy yet nimble, remains rather memorable.

As with many pioneers I don’t feel Warfare got the credit they truly deserved and, like many trailblazers they got gazumped by those who followed and refined the sound for mass consumption. But listen to tracks like ‘Let The Show Go On’ and you can definitely hear the template of what would become known as extreme metal and it’s a sound that was mined by countless bands. Songbook Of Filth is a smorgasbord of all that’s good and heavy and stops off at all points along Evo’s illustrious career with ‘Misanthropy’ featuring the unmistakable tone of ‘Fast’ Eddie Clarke and, fittingly, was also the last appearance of legendary bassist Pete Way. Warfare had a strong sense of humour and vastly improve the old Robert Palmer standard (now rechristened ‘Addicted To Drugs’) but they handle GBH’s ‘Sick Boy’ with great care and, like a runaway locomotive, it threatens to go off the rails. However, unlike their peers Warfare weren’t all paint-by-numbers thrash and ‘Death Charge’ injects slower passages to deliver a real skull-crusher before ‘Solitaire Dementia’ closes the disc in typically unruly fashion.

There was only one way that this disc could possibly follow the first, and that was with a trio of incendiary live tracks. Quite possibly Warfare’s natural habitat the live environment allowed the band to become more filthy and the audience always responded in kind. With Evo whipping up the crowd from behind the kit you get the feeling that anything could happen (and if you listen closely, I’m sure you can hear the pint glasses flying!) with the aptly titled ‘Rabid Metal’ perfectly summarising the live Warfare experience. A filling-loosening rumble heralds the arrival of ‘Burning Up’ and finds all the needles firmly in the red, the band eschewing a clean sound for something dirtier and that made tracks like ‘Atomic Slut’ the complete antithesis to the polished corporate rock that infested the charts and amen for that.

Despite the years, varying line-ups and recording venues that separate these tracks Songbook Of Filth hangs together as a cohesive whole, the tracks flow smoothly and that’s primarily due to the aggression that’s ever present. ‘This Machine Kills’ is a bundle of aggro that threatens to leap from the grooves and give the listener a good clout while ‘Baron Frankenstein’ (originally written to celebrate the Hammer franchise’s 40th anniversary) adds keys to reveal a band unafraid to take a few chances. To close this disc three tracks from Evo’s pre-Warfare days brings things nicely full circle. A live version of Major Accident’s ‘Fight To Win’ sits easily alongside The Blood’s ‘Degenerate’ and disc closer ‘Two Million Voices’ (Angelic Upstarts). These cuts, riotous Oi! tracks all, are underpinned by a strong melodic sensibility and that’s something which Evo continued throughout his career.

If two hours of full-on Warfare weren’t enough then this set includes a bonus EP to slay any survivors. Like Hawkwind overdosing on amphetamine ‘Misanthropy (Sonic Attack Mix)’ does exactly what it says on the tin. Thankfully, it doesn’t tamper with the original too much and just amps everything up a few notches, which is always a good move. A panzer division rolling across the plains ‘Noise, Filth And Fury’ could quite easily be the band’s motto and it is a riff heavy beast that stomps all over your living room and is guaranteed to blow your speakers. Harking back to Evo’s punk days ‘Burnt Out’ races along at 100mph before ‘Military Shadow’, the soundtrack to a world perishing in global apocalypse, provides a fitting closer.

There are several Warfare compilations on the market but this three disc set (also available on single vinyl) feels the most complete. Chronicling Evo’s career with rare and unreleased tracks makes Songbook Of Filth an essential purchase for both the hardcore and casual fan. A ‘New Age Of Total Warfare’? Bring it on! 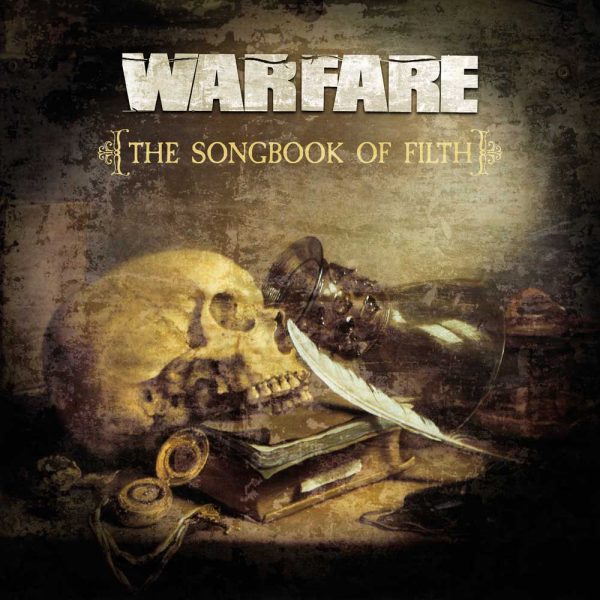