Portuguese label War Arts Productions (Website; Bandcamp; Facebook) love their black metal. MR’s Jason Guest likes a bit of black metal too and so lends his ear to three of the label’s releases. First up is the blackened deathened doomened war-themed debut demo from FlaktiiN, Souls For The Legions. Then we have a split cassette from Portuguese long-timers Irae and USA (relative) newcomers Moribund, both bands contributing three raw black metal tracks to black Our Worship To Epidemic Suicide And Death Of The World. And finally comes the fourth album from Portugal’s Morte Incandescente,  …o mundo morreu! No clues. You can read about that one yourself down below…

FlaktiiN – Souls For The Legions

The debut demo of Portugal’s FlaktiiN stand out from their black metal brethren because of their more, shall we say, “well developed” sound. Though they may bear all of the atmospheric density and venomous vitriol that defines black metal, it’s got a weight to it that leans more towards that of death metal (without the muffled muck that deadens the sound) and doom. That war and strife are their key themes – themes that have been well explored and are now well worn – also works in their favour.

There are a few moments when the tracks blur into one and the similarities to other bands and the (sub)genres they draw upon threaten to put this on the pile of sound-alikes. Combining brute force, atmospheric gloom, discordant textures and jarring dynamics, Flatkiin manage to imbue the demo with more than enough of their own identity to make them stand out as a band with much promise. What Flatkiin have done with this demo is establish a solid foundation within which they have plenty of space for exploration. It’s definitely worth waiting to see where they go in future.

With two albums and countless splits to their name since 2002, Portugal’s Irae have had plenty practice churning out lo-fi, hi-fire raw black metal. That ‘O castigo de deus’ opens with a bass riff and a beat that could grace many a punk album is a surprise, to say the least. Snap your fingers a few times and this could be a jazz number. But no, Irae drag it into the darkness and spit venom and bile and nastiness all over it and desecrate its punky façade. So too for ‘Como uma foice para vos ceifar’ and ‘Warlord of Satanichia’, both of them plodding along with predictable rage.

Almost-nobodies Moribund drag the depths and drag us down with them, doom and gloom as their guide and doom and gloom as our cohorts. The twin black metal bunnies of wrath and rampage soon make their appearance and Moribund are quick to tear us apart. Dissonant riffs, relentless drumming, and a vocal laced in acid and the three tracks on offer here burn a hole deep and wide. Like Irae’s three tracks, these three tracks are good but there’s nothing new here – not that they’re trying of course – and there’s nothing special to mark them out as anything more than another black metal band. 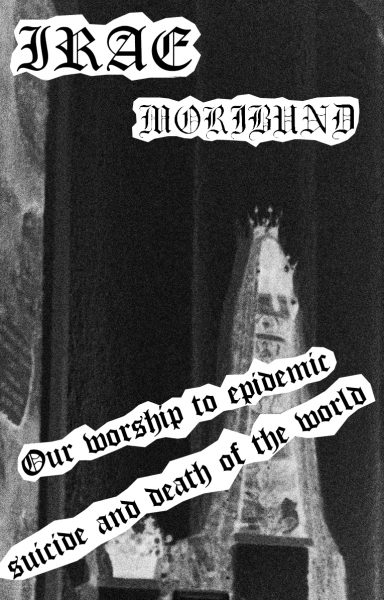 Portuguese black metal duo Morte Incandescente have been at it since 2002, releasing three albums and a few splits and EPs, and never once invested in any decent recording equipment. Even …o mundo morreu!, their fourth album, sounds like it was recorded on some crappy cassette player in a dank, fusty cave brimming with dead bodies and despair. Well, on the surface of it anyway. This is, after all, black metal as it is “supposed to be”.

Morte Incandescente are not– nor have they ever been – about breaking new ground. That’s not their aim. Their aim is not to. Their aim is to re-produce that “authentic” black metal sound that is for the “select few” who “get it”. And they do a fairly convincing job. Some great riffs, a few good tracks, and all ablaze like a church in the 90s, though it may sound like, look like, and smell like black metal, it’s knowingly so. As little more than simulacrum, this falls foul of its own aspirations.