Trout’s previous albums, ‘Battle Scars’  and ‘Survivor Blues’, dealt with his failing health and need for an urgent, life-saving liver transplant. ‘Ordinary Madness’, however, addresses matters of mental health and, as is all the best blues music, painfully honest and autobiographical.

Despite the sampled and electronic intro to the albums lead track, this isn’t an album of experimentation. Walter plays the blues, and that’s exactly what he does here. It’s all masterful, as you’d expect. They have nothing to prove, Trout and his faithful band are more than entitled to carry on doing what they’re, erm, doing.

So, yeah, it’s blues. When Trout eventually weighs in with one of his solos, it becomes the song. The guitar is his true voice and he sings with as much clarity, expression and fire as he always has. The guitar work is worthy of the price of admission alone.

But there’s a lot more. Songs seem to split off into distinct camps. There are several love songs. Love gone wrong. Love full of regret, missed chances, ruefulness. The aching solo on ‘All Out Of Here’ recalls Jimmy Page on ‘Since I’ve Been Loving You’, for me his finest moment. ‘Make It Right’ may also be about a broken relationship but Trout’s solo pushes angrily at the blues speed limit.

The other major theme? Trout’s clearly got those ole’ mortality blues. Dark clouds are approaching and Trout is more than aware of the ticking of the clock. Just a glance at some of the song titles – ‘Final Curtain Call’, ‘The Sun Is Going Down’ – these are dark blues (violets?). There’s no self pity in these songs, just clear-headed observation. They’re honest, ballsy. They’re nice and rough-edged. “Mountains left to climb, but I’m running out of time”, “I feel myself getting weaker” and indeed Trout’s voice on this album sounds older, slightly more fragile, vulnerable. But there’s still anger in those fingers, the Grim Reaper is defiantly kicked into touch on several occasions.

And we end on the unapologetic and quite seriously pissed off ‘OK Boomer’. Bloodied, unbowed and playing like a beast, Trout pushes his voice and guitar to the limit, kicking against the pricks with doubt-erasing brutality. He’s not down and out yet, not by a long shot. What we’re left with is a mid-table Trout album, not necessarily his best but certainly consistent and always engaging. If you’re already a fan, you’ll love this latest instalment. 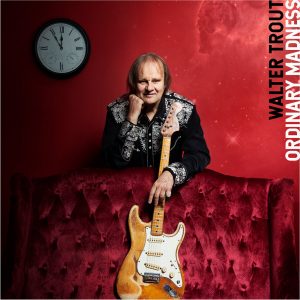