Reviewed by Allan Jones and released on 10 March 2017

Now and again a new band comes out of nowhere with something that you haven’t heard before. Now, in this case, ‘nowhere’ is actually around seven years of hard work, illness, and sonic refinement – but with very few tour dates behind them you’d be forgiven for having missed them.

However, you will not be forgiven for not giving this album a listen. Immediate comparisons to the likes of Paramore and Skunk Anansie are both obvious and, at the same time, pointless: Vukovi are very much their own band, and veer effortlessly between the happy, up-beat pop sensibilities and the heavy-as-hell rock that they drop like a ten ton hammer.

Reworked songs from the band’s previous EP Sweet Swears appear on here in a new form to complement the rest of the album, but you’d be hard-pushed to pull them out if you didn’t know them already. The band’s fascination for sounding sweet and innocent but delivering darkness and despair continues, too, with the album’s lyrics covering abusive relationships, suicide, drug abuse and depression. However, despite the darker subject matter, there’s a triumphant note throughout the album – a mental two fingers raised to the issues you face with a sneer on your lips and pride in your heart.

Opening single ‘La Di Da’ is an absolute belter of a track – the opening searing vocals combining with cranked up guitar lines to create something utterly monstrous. The groove of the rhythm section perfectly complements the power of the vocal, and elevates it into the perfectly sublime. That groove explodes on other songs on the album, too, and at times it feels like nothing short of a controlled frenzy.

The devilish riffs continue to pummel you throughout, but the tone will suddenly switch – ‘Weirdo’ kicks off with a big crunchy guitar, and then slips softly into a very pop-oriented electronica verse before working itself back up into a thumping chorus. ‘Prey’ is a more pop-friendly take with some beatifully understated guitar-work, but for me the band are at their best with the heavier work on ‘Wander’ and ‘I’m Wired’.

It’s inventive and infectious, and it’s utterly brilliant. Vukovi are one of the most original new bands on the scene at the moment, and on this showing they deserve to be huge. 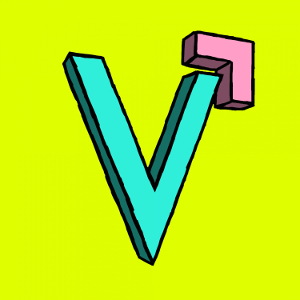