In view of the fact that the Von Hertzen Brothers were only playing three UK dates in support of their fine new album, New Day Rising, it was a real pleasure to see one of these dates was to be at the Slade Rooms, and it was good to see that the venue was pretty full to see one of the best live bands I’ve seen in the last few years.

It was a three band bill, opened up bang on the advertised start time of 7.30 by British band Ulysses. Having heard some of their stuff prior to the gig, I thought they might have been a strange choice on tonight’s bill, but there was something more about them than might have been first thought. It was blues based rock to be sure, and at times pleasingly heavy, and with the occasional touch of psych and even a spot of Southern Rock, Allmans-style, to ensure that things were never less than interesting. They could perhaps be a little more visual, because there wasn’t a lot of movement on stage, but they engaged with the crowd and overall this was a pretty entertaining set.

Second up, and more blues rock, from the young British band Blackwolf. They had the same subtle nod to the South as Ulysses, coming across at times like a heavier Black Crowes, but while they seemed to have the edge in the songwriting department, they didn’t quite have the enjoyable element of surprise of the first band. It was very listenable, and I probably wouldn’t wander off to the bar rather than watch them again, but I couldn’t really see a spark, or something that suggested they could one day move up a division or two.

Although there was a healthy crowd to see both support bands, the Slade Rooms begin to fill up significantly  as the Von Hertzen Brothers’ stage time approached and there was a real buzz about the prospect of seeing one the best live acts currently on the circuit; not just in what is termed as ‘prog’ these days but among bands of any genre. Obviously the main intent of this short stint of gigs was to promote New Day Rising, and nearly half the set was drawn from the new release. The opening salvo of ‘I’m On My Way’, ‘You Don’t Know My Name’, and ’The Destitute’, were all taken from the new album, and opened the show with a fair amount of attitude. ‘You Don’t Know My Name’ in particular felt as if it was being played at twice the speed it was recorded, such was the sheer exuberance of the band.  However, fourth song, the anthemic ‘Flowers And Rust’, from the previous album Nine Lives, raised the intensity levels even higher, and from then on the band more than lived up their reputation. ‘Trouble’ saw Miko Von Hertzen jumping down into the photo pit to increase his connection with the crowd, and ‘Coming Home’, also from Nine Lives, can only be described as riotous.

In fact so hard were the band playing, and so great was their enthusiasm, that Miko was shortly about to confide to the crowd that they were going to have to rein themselves in, as their collective bouncing around the stage was causing the power connections on stage to become loose and was affecting their gear, but while it seemed to clear up the problem, if there was any slackening off in the band’s performance, it wasn’t exactly noticeable. They did wind things down a little, although I suspect it was more to give the crowd a breather rather than themselves, with another new song, ‘Black Rain’, before pressing down hard on the throttle again with ‘Love Burns’. It seem as if the sound was getting a little muddy at times, which was a shame, because the vocals are a large part of the band’s sound, but it did nothing to spoil the overall enjoyment of the show.

The end of the set was a further delve into the back catalogue, with three songs from the Stars Aligned album before the main set ended with the anthemic ‘Freedom Fighter’. Obviously there were encores; ‘Sunday Child’ from the new album, and ‘Prospect’ from Nine Lives, bringing to an end a terrific set. This show more than justified the band’s reputation as a live act, even if, as good as they were in the Slade Rooms, I have actually seen them play better than this. It really was a great show, by a band you really have to see.

See more of Lisa’s photos from the show here 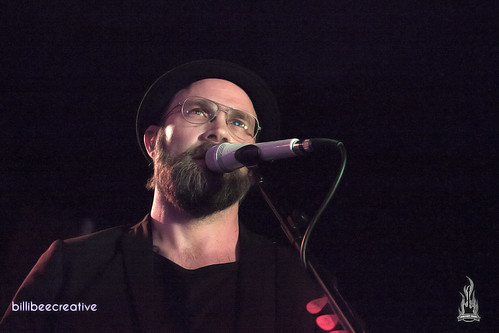