Dubai is home to outrageously extravagant hotels, a horseracing family empire and death metal duo Voice of the Soul. The band was formed by two teenage sons of Kuwait on the opposite side of the Persian Gulf in late 2007. Kareem Chehayeb and Monish Shringi released their first EP, Winds of Apprehension in July 2009 a second EP, Eyes of Deceit following a year later. I have no personal experience of the Dubai music scene but the band’s PR machine tells us that after some gigs in Dubai, Voice of the Soul relocated to the most popular city and emirate in the United Arab Emirates before releasing their third EP, Into Oblivion, in 2011. This proved to be their breakthrough release generating airplay and interest in many different countries.

If the band were seeking to make their first big statement with debut album Catacombs then it’s an ambition achieved. The still-young founding members have now recruited Rudy Fares on drums, with long-time friend Bassem Farra is pounding away on the bass for live shows. Catacombs was released in the UAE in September but is now getting a Euro ticket, via Hell’s Hammer. The album opens with a gentle intro passage of interchanging chords that suitably reflect the title of ‘Desolation’ before the evil is unleashed with ‘Perpetual Deception’, a raging furnace of caustic blackened metal, Kareem’s deep growls only marginally softened around the edges by some engaging guitar work.

‘Pendulum’ follows down much the same path although with the pounding slams racketed up a few notches. As Kareem spits and snarls his way through ‘Quarantine’ concerns surface that Catacombs could merge into one extended barrage of middle eastern chugging. A mid-song instrumental keeps us on our toes as it becomes clear that Voice of the Soul are carrying other arrows in their sheath, that they’re just waiting to unleash.

Just as we’re braced for another eye gouging sandstorm they whip out a standout number in ‘Cold Rupture,’ a tormented titan of a track that really hooks you in like a rubber duck at one of those archetypal English seaside stalls. A melancholic opening is then further stoked by some crisp clean singing before Kareem’s distinctive croak returns, albeit relayed over much softer terrain with the earlier raging flames now turned down to a more soothing flicker. Think Insomnium and you’ll be moving in the right direction.

The more tranquil approach continues at the start of ‘The Mist’, another instrumental track in which the ivories are warmly coerced into a soothing soundscape. Have these middle eastern warriors gone completely soft, or what? Of course not, and on ‘Perdition’ the pervading sense of hunger and urgency returns, with a cutting guitar sniping away as Kareem’s barks get louder and more barbed. ‘Defiled’ is another Kuwaiti concrete crusher which ends up with an incessant pounding beat that reduces your senses to dust, or perhaps more pertinently grains of sand.

An all-round strong debut album ends in slightly disjointed fashion when Daylight Dies’ bass playing singer Egan O’Rourke takes over the mic on ‘Images Subside’. So when you factor in a couple of instrumentals, we’re only getting the true Voice of the Soul sound on six of the nine songs. Coupled with the fact that O’Rourke’s delivery is so different from Kareem, Catacombs actually closes with more of a whimper than a bang. But perhaps I’m being unnecessarily harsh? Why not judge for yourself. 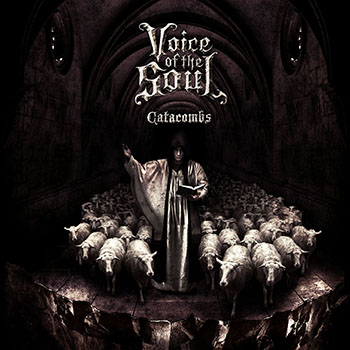