Dark, dirty and unremittingly aggressive savagery… on a school night too! 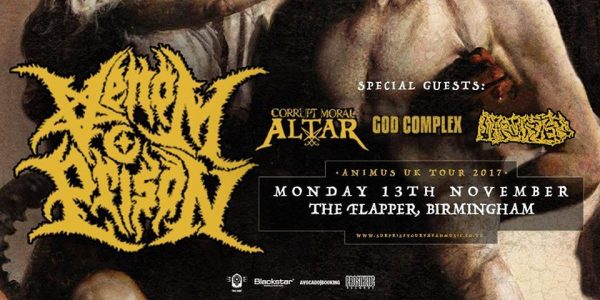 Before we discuss the bands on tonight’s bill, it has to be said that tonight’s promoters, Surprise You’re Dead Music (Facebook), have long been lining up great gig after great gig. A quick peek at their website and the list of bands they’ve looked after is incredible: Yob, Melvins, Uncle Acid & The Deadbeats, Winterfylleth, Anaal Nathrakh, Insomnium, Karma to Burn, Sick Of It All, Solstafir, Acid Mothers Temple, Earth, and plenty more. And the list of bands they’re bringing to us in the future is outstanding, one excellent band after another. And here we are in the middle of a customarily chilly November at the soon-to-be-no-more Flapper with another excellent line-up.

If War Master’s (Facebook) album Denial Of Life, available on Bandcamp, is anything to go by, it’s much to my loss that I missed their set. Hardcore mob God Complex (Facebook) are in a destructive mood and so, armed with down-tuned, distorted and dissonant riffs, hardcore hooks, slamming breakdowns, and throat shredding vocals delivered by a top-off-tattooed-torso vocalist, they proceed to bring forward the demolition of the venue through their crushing set.

Next up is the filthy grind, punk, metal, sludge of Corrupt Moral Altar (Facebook) whose guitarist John Cooke currently has the pleasure of filling in for Mitch Harris in Napalm Death (last seen in Birmingham earlier this year and reviewed here). Latest album Eunoia (available on Bandcamp) is raw and ruthless, just like the band is on stage. Guitarists Cooke and Adam Clarkson and bassist Oliver Turner hit their instruments hard, almost as hard as Tom Dring pummels the kit. And vocalist Chris Reese brings the bile and the venom. Together, this is some dark, dirty and unremittingly aggressive savagery. Monday night just got brutal and scary.

Venom Prison (website, Facebook, Bandcamp) are back at The Flapper to leave their mark and do further damage to the venue and tonight’s attendees. Last year’s Animus is a killer piece of work, an album that shows how far this band has come since 2015’s Defy the Tyrant and The Primal Chaos. While both impressive works, as well as the production, the writing and the collective performance of the band on Animus is as sharp as the knife used to remove the genitals of the victim ornamenting the album cover. And live, they are tight and focussed, keeping the ferocity and the power levels as intense as can be throughout their cranium-crushing set, vocalist Larissa’s stage presence as intimidatingly vicious as her bark. And with a pit quickly formed at the front of the crowd, this evening, Venom Prison left many a blackened bruise and broken bone on Birmingham’s underground. In April 2018, they’ll be back with Trivium, Power Trip and Code Orange at the Academy. Make sure you’re there…