It’s hard work keeping the hellfires burning. The ungodly cloven-hoofed one must work like, well, a demon. But even Satan needs to put his misshapen feet up occasionally and when he does I’m damn sure he’ll be listening to the new Venom deluxe box-set In Nomine Satanas – 40 Years in Sodom, an unparalleled celebration and permanent record of a remarkable 40-year career.

From the opening destructive thud of ‘Welcome to Hell’ to the even more rabid ‘Angel Dust’ this wonderful new release celebrates and documents the band’s groundbreaking early work that not only spawned generations of imitators but a whole new musical genre in Black Metal.

There’s scarcely a dark or black metal band alive who haven’t tipped their hat to Venom at some point, either aurally or aesthetically. Certainly the Norwegian hordes such as Mayhem and Darkthrone along with Celtic Frost who were fundamental in establishing the Black Metal sound and movement all reference Venom – a three-piece from the north east of England – as the forefathers of this most fevered form of dark music.

This quote from Mayhem’s Necrobutcher pretty much says it all – “I didn’t know it back then because everything was fresh. We didn’t know what we were looking for, but when I heard Venom, that was it.”

Even now tracks like ‘In League with Satan’ and ‘One Thousand Days in Sodom’ still send shivers down your spine, Cronos at the helm barking out the Luciferian lyrics, Abaddon pounding away with his sticks like a man in the grip of a possession and Mantas executing delicious crucifix-snapping riffs. As with Motörhead, speed freak tracks such as ‘Black Metal’ – with its war cry of ‘Lay Down Your Soul to the Gods Rock n Roll’ – endeared Venom as much to the punk crowd as the metalheads back in the early 80s.

Venom, while certainly masters of blitzkrieg frenetic fretwork, also knew that occasional slower numbers added to their wider haunting appeal, such as on the meaty ‘Buried Alive’.

In Nomine Satanas is a meticulously and lovingly prepared vinyl package that showcases the band’s original Neat Records recordings; Welcome To Hell (1981), Black Metal (1982) and At War With Satan (1984). Also contained within this highly collectable box of beautifully presented black magic is the album Possessed (1986) and a live show Eine Kleine Nachtmusik from the same year.

Delve deeper into the box and you’ll unravel a book that chronicles Venom’s career and its impact on Black Metal, along with interviews with all three original band members, written by respected journo Dom Lawson. There’s also a reproduction of the ‘Seven Dates Of Hell’ tour programme.

The remastered records themselves are on assorted coloured vinyl and there’s even a back patch for you to stitch to your battle jacket featuring the band’s devilishly distinctive Baphomet logo. Of even more interest for the real diehard Venom fan are some recordings of long forgotten and rarely heard cuts, some even stretching back to the embryonic Venom which featured Clive ‘Jesus Christ’ Archer on vocals.

The box set may burn a bit of a whole in your pocket but this is a collectors’ piece you’ll want to take to your grave. There is a CD double album option available with 43 tracks stylishly presented in a media book format.

Cronos himself is still going strong, only a few months ago releasing another excellent Venom album in Storm the Gates. But if you want to experience the full force of Venom from back in the day then In Nomine Satanas will be an invaluable and highly treasured addition to any music fan’s collection.

You can pre-order In Nomine Satanas here. 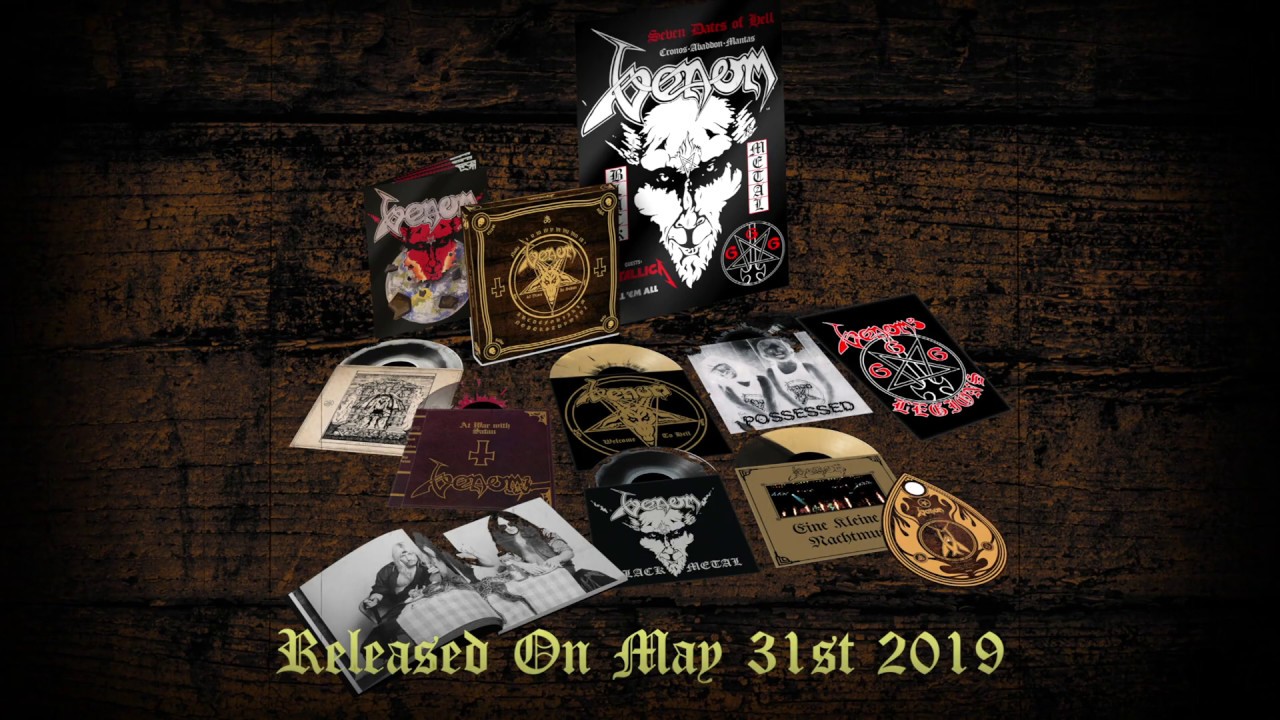