In those distant days before mobile phones and the internet ideas travelled more slowly. Budding musicians would have to pick up small clues from television or travelling bands then reassemble those clues in new ways. That’s exactly what happened in Denmark. Tucked away in a corner of Europe a unique scene developed, and while there’s a definite Anglo-American influence on this box set, the Danes, having been occupied by the Nazis twenty years previously, were in no mood for another invasion; even if it was cultural.

Running almost chronologically Living On The Hill – A Danish Underground Trip 1967-1974 explores the Dansk scene as it evolved from the hippy dream into an LSD nightmare and the fine smorgasbord of bands contained on this compendium weave a rich, original tapestry which told of a time when psychedelic music was truly progressive.

Opening the first disc with a swirling psychedelia are the Beefeaters who were one of Denmark’s earliest beat groups. Subsequent support slots with Hendrix and Floyd evidently rubbed of on this quartet and by the time they released their eponymous debut they’d evolved into a fully-fledged psych combo. With shades of Hawkwind ‘Night Flight’ is an instrumental that takes the listener on a magic carpet ride over iced mountains and fjords. Day Of Phoenix deliver the Dave Cousins (Strawbs) penned ‘Tell Me’ which could have come straight off the Nuggets album with it’s West Coast sound that’s garnished with eastern flourishes. Things take a darker turn as Young Flowers deliver ‘Ouverture/Take Warning’ like a sinister Arthur Brown.

Signed to Polydor Records The Savage Rose were one of Denmark’s best know bands. In Anisette Hansen they had a vocalist not dissimilar to Janis Joplin and, with three keyboard players, they produced a full sound that resulted in the perfect single, ‘Long Before I Was Born’. Things get enticing with Burnin’ Red Ivanhoe and their free form jazz leanings and ‘Ksilioy’, from their debut album is the perfect blend of jazz and rock that earned the band John Peel’s seal of approval. With several songs breaking the 10-minute mark things are truly progressive and never staid as Alrune Rod veer between folk and proto-metal on ‘Natskyggevej’.

With a name that conjures images of America’s deep south you’d think the Delta Blues Band were simply blues purists. But you’d be wrong. With an incessantly satisfying bass rumble the aptly titled ‘Opus 1’ takes the listener on a musical journey that recalls psych heavyweights The Nice. Day Of Phoenix return with the epic title track from their second album and ‘Wide Open N-Way’ proves they can handle complex arrangements just as well as snappy singles. In a small scene, musicians often moonlighted in other groups and ‘Rainbow Band’ could be considered Denmark’s first supergroup and the deliver the succinct ‘B.M.’ before Burnin’ Red Ivanhoe return to close the disc with the ethereal ‘Jingle Jangle Band’.

The great thing about compilations such as these is discovering previously unheard bands and such a moment of epiphany for me was Ache. A chance meeting with ballet dancer Peter Schaufuss in 1970 found the band collaborating on a rock ballet piece, ‘De Homine Urbano’, which is presented here in all its 19-minute glory. Predating The Who’s rock opera by several years it combines elements of classical with some serious Zeppelin style riffage. Pan were formed by troubled French singer and guitarist Robert Lelièvre and were master alchemists fusing jazz and rock to great effect and their ‘To Get Along’ drips with bluesy soul. There’s plenty of variety on offer with Rainbow Band delivering a folksy ‘Rainbow Song’ while the short-lived Blast Furnace get all proggy on ‘Toytown’.

Making good use of musical dynamics Culpeper’s Orchard deliver the cascading ‘Mountain Music (Part One)’. They’re a band who make much modern music seem prosaic as they pepper their songs with plenty of time changes which recall Dutch band Focus at their most frenetic. The Old Man & The Sea create a huge soundscape that captures the enormity of the ocean which threatens to drown the listener in successive waves. The Savage Rose also appeared on Disc One but ‘Tapiola’ from 1971 evidences a band ageing like fine wine and plenty of studio wizardry gives proceedings a haunting, otherworldly quality. In opposition to their previous contribution Rainbow Band really stretch their musical wings to deliver the 15-minute ‘Living On The Hill’. A song of many suites it flits from jazz to heavy blues seamlessly before Ache return to close the disc with ‘Shadow Of A Gypsy’.

Ache open the third disc with the swirling psychedelia of ‘Equatorial Rain’. Taken from their 1971 Green Man album it’s a song that seems to emanate from the depths of the underworld. It’s a real delight to hear these bands evolving over the course of this collection and Burnin’ Red Ivanhoe, with their ever-rotating line up, deliver the hallucinogenic ‘Avez Vous Kaskelainen?’ and show an exorbitant amount of growth. Formed in 1970 in Copenhagen Thor’s Hammer were relatively latecomers to the scene but their sole album stands as a bench mark and ‘Mexico’ is delivered all wrapped up in golden hues. Blast Furnace serve up the slightly surreal ‘Ginger Cake’ and, with its delicious flute solo, it’s lovely and airy.

Featuring members of Burnin’ Red Ivanhoe, Hurdy Gurdy and Coronarias Dens jazz/rock combo Secret Oyster were something of a supergroup and their calibre really shines through on ‘Fire And Water’. With plenty of wah wah on the guitar and a classical arrangement there’s something strangely addictive about Secret Oyster. The heavy blues of Hurdy Gurdy foresaw the future of rock but like most visionaries they were usurped by those who came later but nevertheless ‘Lost In The Jungle’ remains a potent symbol of those times. Dr Dopo Jam took their cues from Captain Beefheart and Frank Zappa and, as you’d expect, their sound is suitably eccentric. From their 1974 album Sea Son Secret Oyster bring this collection to a fitting close with the cinematic ‘Mind Movie’.

While countercultural scenes in Sweden and Germany have been well documented the underground movement in Denmark has been criminally ignored. Hopefully that’ll be rectified with the release of Living On The Hill – A Danish Underground Trip 1967-1974 which contains four hours of the very best music, regardless of genre. 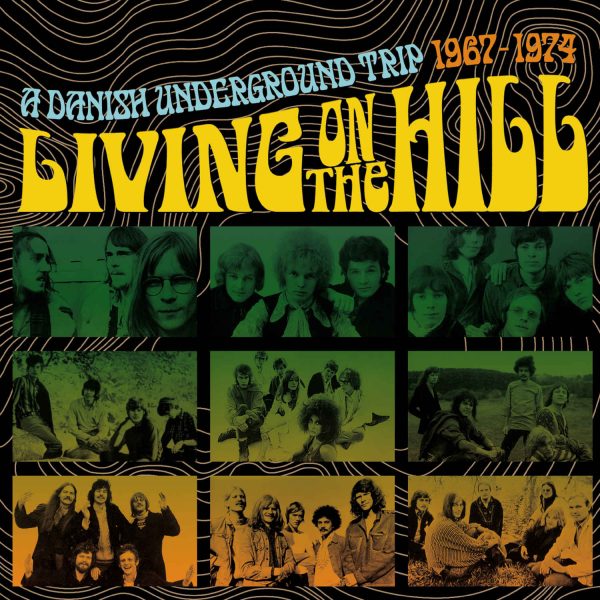