This will Iron out the creases

Vader are little short of Polish metal royalty in their homeland, having fought metaphorical battles across Europe and beyond for more than 30 years. Live they’re an impressive force, of blackened death thrash shovelling riffs by the ton as I witnessed for myself in Nuneaton last year when they shared the Queen’s Hall stage with compatriots Hate (reviewed here).

Vader’s four-track EP Iron Times is a cracking introduction to the band to any newcomers and also sets tastebuds tingling with anticipation for the full length release of their twelfth album, The Empire, later in the year.

Of the original line-up Peter Wiwczarek is the last man standing, now on guitars and vox, having been the bassist in the band’s early years. While remaining Polish to the core, the last few years has seen Brit James Stewart behind the drumstack.

Iron Times opens with the double trigger attack of ‘Parabellum’ and ‘Prayer To The God Of War’ both solid death metal nuggets, the Slayer-like latter carrying a little more shape after the tumultuous thrash of ‘Parabellum’.

This is followed by two cover tracks, one which you’ll know and another which many will not.

Pięść I Stal is a song by Panzer X who were a side-project of Wiwczarek and his pal Vitek from Decapitated. Panzer X released a solitary EP, Steel Fist, before Vitek’s tragic death in a car crash in 2007. Pięść I Stal is the title track from that EP and stands out from the usual Vader material as it’s sung in Polish. It’s also an absolute gem with a meaty riff that would have a vegetarian choking on their bowl of hummus. As such it’s a fine tribute to Vitek.

The final number, ‘Overkill’, needs no introduction, other than to say it’s a fine rendition of the Motörhead anthem with the famous  midsong drum solo included.

At only 15 minutes, this EP does whizz by but then that just gives you a chance to play it more often. The album in November, also via Nuclear Blast, is eagerly looked forward to.  In 2015 Wiwczarek published a book about his life in the Polish veterans called Total War. Looks like another chapter will soon be necessary. 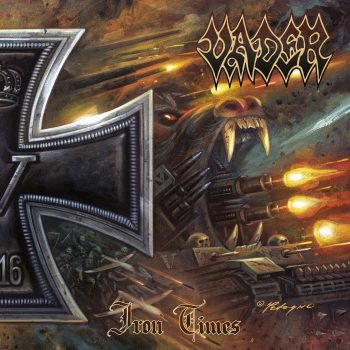