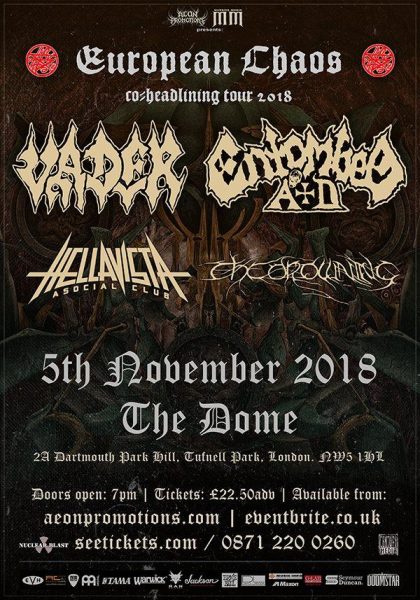 Entering The Dome in Tufnell Park – almost a second home to most of London’s metalheads – I was surprised to find it less busy than anticipated. Perhaps this was down to Hellavista, whose early set of groove thrash, accompanied by punk-influenced rocket-fast vocals, failed to get the crowd engaged. I believed that this would set a precedent for the whole night. Oh, how I was wrong…

Swedish legends, Entombed AD, took to the stage with the backdrop of an atmospheric soundtrack of doom – although a much more condensed version than many of their Scandinavian black metal comrades. This was a co-headline show, alongside Vader, with Entombed AD taking the first slot. It was clear that for many here tonight, Entombed were actually the main attraction.

What followed was an hour of intense metal and crowd interaction. It involved ferocious circle pits from the moment the first riff rang out and an almost constant stream of stage divers. Young and old scrambled onto the stage, arms around L.G, embracing him and joining his headbanging ritual for all to see. The outnumbered stage crew scrambled helplessly onto the stage as the one or two divers began to escalate into a full-blown invasion.

The overworked stage crew began, quite humorously, to push them back into the crowd from the stage – a forced leap of faith. They were dominoes, flicked into a pool of long sweaty hair and denim jackets. Suddenly, the crowd I had previously dared to underestimate were alive as spawned from the depths of Hell. Had more people arrived? Or did their vivacity just make it seem so? Either way, it felt rammed – no one was to escape the madness as the Swedes smashed through old favourites ‘Left Hand Path’ and ‘Survived To Rot’.

Entombed AD are widely revered as one of the pioneers of Swedish Death Metal, headed by the legendary frontman  L.G. Petrov. Despite not having released a new album for over ten years, presumably due to the bands inconsistent line-up and consequent name change (the addition of ‘A.D.’ in 2014), the band have retained a loyal following which signifies their lasting influence across the genre.

L.G. has an energy on stage which truly makes the crowd feel involved; he is not so much a front man, but a stage man – inviting everyone to his miraculous circus show. He would grunt sporadically, and the crowd would grunt back, L.G. laughing and claiming to emulate ‘the great man’ Tom G. Warrior.

Entombed were followed by Polish death metal crusaders Vader whose roots also stretch back to the ’80s. Both bands were in north London just 48 hours after participating in Damnation at Leeds Student Union. Vader have had a much more consistent discography, having released their last album, The Empire, in 2016. Their music combines elements of thrash with the more traditional death metal sound; a tell-tale sign of their heritage.

Their set was greeted with devotion, with more fans throwing themselves at the stage – although, the number of stage divers didn’t quite reach the same levels as clocked up for Entombed AD – too busy in the the mosh. Vader have a hard, fast and heavy sound which will appeal to any death metal fan, but Entombed AD brought an atmosphere to the evening which was hard to top.

This was a night of two distinct and legendary death metal bands; one leaning towards thrash and the other black metal. It was a night to celebrate the history and widespread impact of the genre, and a night for fans to show their unrelenting dedication to the Satanic cause.