Three Out Of Three Ain’t Bad…

By bulking up the era’s AOR stylings with heavy metal muscle, 1982’s Abominog launched the band on a new trajectory. Then, 12 years later, 1994’s Sea Of Light dared to be different by returning to classic, old school rock’n’roll. Sometimes you have to go back to go forward.

The album was fresh testament to the durability and songwriting nous of Mick Box and Phil Lanzon, showcasing a lyrically mature if uninflected worldview. It was a lot less ‘umble and a lot less ‘eavy.

Specialist label, Cherry Red Records, have now re-released the album, including the 3 bonus tracks added when the whole shebang was remastered in 2013. It’s one of three CDs in a mouthwatering box set that includes the equally fine studio album, Sonic Origami, a recording that edged the music up the bombast scale, without falling foul of the bloat and bluster that handicapped many Rock bands of the time.

Both albums are filled to the brim with conventionally structured songs which means there aren’t any real surprises, just plenty of skilfully crafted tracks, Sea Of Light‘s standout cuts, ‘Mistress Of All Time’ and ‘Against The Odds’, dip their toes into operatic rock territory. Others have their feet firmly planted on solid ground, building to something monolithic, yet showing restraint at the climactic moments, like the gorgeously optimistic pop rush of Time Of Revelation; the rolling, rumbling ‘Universal Wheels’ and the juddering seventies’ rock throwback ‘Fear Of Falling’.

Amusingly, many rock critics were caught out, having already consigned the band to their dungeons and dragons past, but even better was to come. 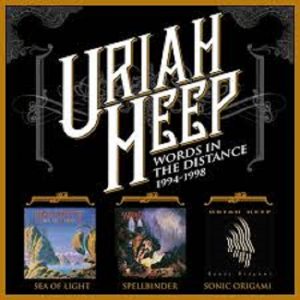