In the three and a half years that my daughter has been alive, only once has she asked me to turn off my music because she found it unpleasant. The album was I Have Fought Against It, But I Can’t Any Longer by Rhode Island/Portland’s sludge experimentalists The Body. You can imagine that I was delighted to hear that a chance at converting her to their diverse and threatening sound was in the pipeline, thanks to the band’s second collaboration with New York-based industrial band Uniform, whose own spiel about the album includes references to Bruce Springsteen, New Order and Robyn. Perhaps this would be a gateway album into extreme noise for us to enjoy on the way to nursery.

Fans of both The Body and Uniform will be glad to know that any chance of a three-year-old finding a pathway into their music will not be brought about by this album. After all, Merzbow and Swans also get a nod – and not without good reason. Everything That Dies… is equal parts exhilarating and utterly harrowing. For every layer of raw distorted noise and extended screaming there is a swelling synth akin to those first Blanck Mass releases or a simple electronic melody line that feels more at home on an early Simple Minds release. Dual vocals from Michael Berdan and Chip King slot together as if tracks were a post-industrial-noise re-recording of Islands in the Stream. “All This Bleeding” is a case in point, with its descending chords sounding more melancholy than terrifying, bringing the words “haunting ballad duet” to mind in the most inappropriate way.

The genius of the album lies in how utterly baffling it is. It manages to be both oppressively intense, yet still contains what you could almost call “pop” moments. The noise and the pop blend together seamlessly rather than separating out into musical oil and water. What could have been a disastrous attempt to provide “the middle ground between Robyn and Corrupted” (as they say themselves) is actually a confusingly cohesive whole. Imagine Fiction Factory going into the studio and saying to their producer “this record sounds great, but is it possible to make it so that it physically hurts someone?” The mind struggles to balance it out, not because the disparate styles don’t mix, but because they mix too well. This clearest on the track “Penance”, which gets the head bobbing with a full metal grimace loaded onto the face, then transitions into contented synth-pop-appreciation-face without you even noticing. It shouldn’t work, but it does.

This review doesn’t even touch upon the moments of the album that revolve around warped hip-hop loops or what sounds like field recordings from two hours after the end of the world, and it doesn’t delve into the immensely diverse back catalogue that both of these groups have put together individually. That’s because even after the few spins I have given this work, I’m still trying to figure it out and I’ll probably enjoy doing that every time I listen to it, so you should go and check those things out yourselves. And I’ll keep you posted on whether my daughter changes her mind. 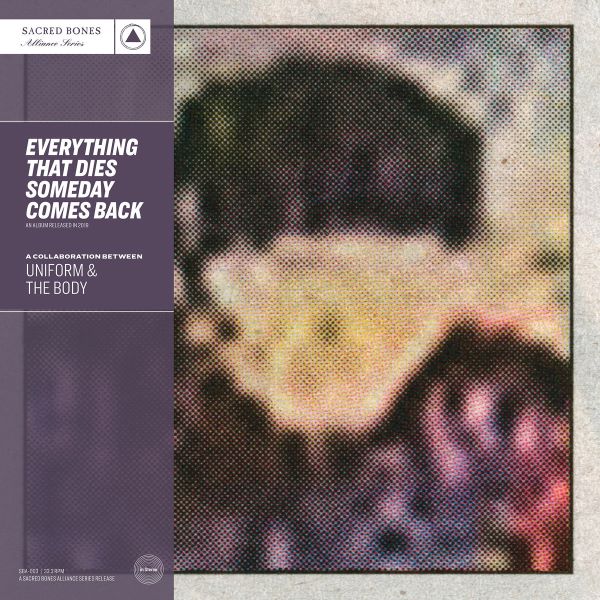