Paul Castles dips his spoon into a spaghetti alphabet soup and comes out with Unaussprechlichen Kulten, whose new album was released by Iron Bonehead Productions on 26 May 2017

As well as possessing the kind of name that you wouldn’t want to tackle in a spelling challenge, Unaussprechlichen Kulten’s new album also possesses one of the most grotesque and depraved album sleeves you’re likely to come across this year.

So we’re off to a good start before we even set Keziah Lilith Medea (Chapter X) in motion with opening track ‘Unholy Abjuration of Faith’. A symphonic slowburner leads us in nervously and before you’ve got time to consider taking a tentative backwards step you become engulfed in the Chileans’ familiar distorted death cult delivery. 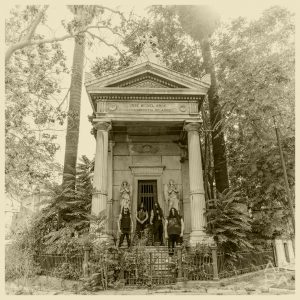 The sense of impending doom is maintained through ‘The Woman, The Devil and God’s Permit’ in which these legendary Santiago savages unleash a lucky dip bag of twisted time changes that send your head spinning like a fan at an Exorcist convention.

Iron Bonehead don’t do nice, but even by their stunningly sick standards, Unaussprechlichen Kulten operate at the extreme end of the torture table. What sets them apart is how they reference medieval monstrosities as their own particular historical period of choice.

Their 2014 release acclaimed Baphomet Pan Shub-Niggurath plunged the sonic depths but this latest slab of festering meat takes things a step closer to the abyss. The guitar work gets inside your head with its tormenting riff patterns and stop start chugs.

With tracks such as the pulverizing and predatory ‘Sacrificio Infanticida’ the South Americans lay down feral sonic plates big enough to feed a small army. It’s brilliantly brutal but with just the right measure of discipline applied.

Last of the eight tracks is ‘Lujuria Carnal Con Incubos,’ slightly pacier, every bit as feral, and full of guttersnipe hooks everyone of which is dripping with blood ‘n’ guts Pull up a chair and join the feast