For a band with a ferociously loyal, essentially Black Metal following, Ulver remain something of a dark secret. Over the past couple of decades or so the Norwegian experimental ensemble have released works of extraordinary beauty, although on the whole with more synth sympathy than you would generally expect of a band with their background.

Newcomers to Ulver listening to new release Sic Transit Gloria Mundi will probably struggle to find a riff on which to hang their studded armlets let alone witness devil horns being hoisted skywards. Compounding the musical mysteries is the inclusion of the third and final track, a stunning cover of a poignant pop classic from the early 80s… More of which later.

Ulver’s electro experimentation bares comparison with few artists loosely brought together under the Black Metal umbrella. Last year’s full length release The Assassination of Julius Caesar was a quite stunning piece of work, infinitely more accessible than their orchestrally enhanced MESSEE I.X-VI.X that came out about a year before.

While the latter veered at times towards Sunn O))) drone – albeit with a meticulously applied layer of polish courtesy of the Tromsø Chamber Orchestra – Ulver unashamedly proclaimed The Assassination of Julius Caesar as their ‘pop album’. The triumvirate of tracks on Sic Transit Gloria Mundi were recorded around the same time as Julius Caesar and are now presented as a 12” vinyl release via House Of Mythology.

As with so much of Ulver’s work, dark and light bounce off each other, silken melodies and harmonies coupled with spoken backdrops on opener ‘Echo Chambers (Room of Tears)’ that somehow bring together the Great Fire of London with the 2005 London bomb attacks, death and destruction being the unifying thread.

It is this juxtaposition of good and evil that Ulver frequently embrace. Musically the arcs spiral so high as to be beyond the human eye and yet within the myriad of purposefully thought out song structures a fairly graphic and disturbing diet hints at things that are less digestible.

On ‘Bring Out Your Dead’ the carousing pop poise, as with Ghost of course,  disguise darker lyrical themes – The holy books are open wide, the future is murder, Dead birds fall from the sky Black Jackals Crawling.

As mentioned earlier the concluding piece will be familiar to most, ‘The Power of Love,’ which while at first hearing similar to the original Frankie Goes To Hollywood cut, on closer inspection is in fact on a deeper level, steering towards the abyss after the initial melancholic beginning.

I’m sure Holly Johnson would approve of Kristoffer Rygg’s sympathetic vocal interpretation as Ulver fit a whole new coat to the Liverpudlian’s iconic No.1 hit as the reverb and slightly misshapen grooves signal a darker musical aesthetic without losing the desperate honesty and beauty of the original thread.

While Norway’s metal connections hardly need restating here, Ulver are slightly distanced from the conventional which makes their contribution to the tableau all the more fulfilling and deserving of your attention. 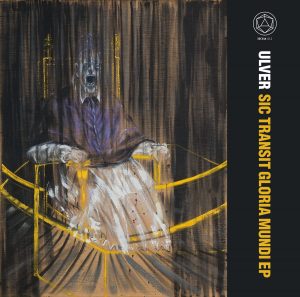 Released by House Of Mythology on 7 December 2018