When it comes to emitting a never-ending stupefying stream of mindbending grooves that seemingly chisel their way into your sub consciousness, Italian trio Ufomammut take some beating. Vocalist Urlo, guitarist Poia and bassist Vita came together to form Ufomammut in 1999. Their last album Ecate was a moribund mix of inventive dischord that sapped the moisture from the air we breathe. Latest release 8 will again leave you gasping like a 60-a-day smoker.

Mathematicians and algebra academics will also appreciate the symmetry of the number 8, which turned on its side is transformed into the leniscate from algebraic geometry – defined as a plane curve that meets at central point. This is known as the infinity symbol which of course fits in with Ufomammut’s punishing patterns which also appear without beginning and end. This album was approached slightly differently by the band, with all three members playing and recording in the same room at Crono Sound Factory in Milan. Overdubs were used primarily just for vocals and synth effects and small details with the result of such endeavour being a stricter focus on the soul, darkened groove.

Perhaps the only less than inspiring thing about 8 is it’s undersold album title. It simple refers to this as their eighth album. To maintain the theme it hosts eight tracks, although as ever with Ufomammut things aren’t as clear cut as that. As on previous release Ecate, one track will often bleed into the next, meaning that the sightlines of each song get blurred within the suffocating sonic storm that the Italians are able to whip up at will.
To describe Ufomammut as ‘heavy’ barely begins to scratch the surface. You’ll need to realign your sonic scales to ‘factory settings’ after they’ve been tested to the max through a duration of 48 malevolent minutes by these Milanese misery merchants. 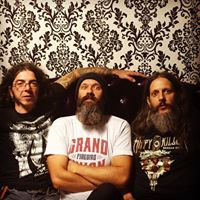 But while the Italians’ penchant for persuasively punishing monolithic magnificence is overwhelming in its sense of authority and command there are a few more cosmological contours immersed within 8. It’s not all darkness. The sun is occasionally allowed to come out to play too as Ufomammut indulge in some trippy psychedelia patterns along the way.

Ufomammut are on the same page as the likes of Neurosis and Sleep, not that you’ll get much of the latter when 8 starts to fill the room with its domineering diet of doom and drone. A looped grinding rhythm is given space to set the foundations down on album opener ‘Babel’ and when Urlo does make his first vocal move it’s so distant as to almost go unnoticed. The air thickens with fuzz in the final couple of minutes as the same spiraling cut works its way into your bloodstream as Ufomammut pull you down further into their blackened world. ‘Warsheep’ continues to challenge your sensory powers, a mid-song break allowing you briefly to come up for air, before you’re plunged back into the rocky waters from where a manic climax leaves you bedraggled and emotionally spent.

By the time we get to songs like ‘Core’ the Italian trio are in danger of complete meltdown as their repetitive rhythmic surges start to take on hallucinogenic lines as Urlo’s rasping cries sound ever more desperate. On penultimate piece ‘Wombdemonium’ Urlo sounds like he’s simultaneously singing while using a mouth wash, as he emits a gargled stream of misery. ‘Psyrcle’ is a formidable finale, completely captivating, although not necessarily in a healthy way. It simply burrows into your by now bleeding brain.

8 feels even more confrontational than Ecate and as such this album will take work before the listener truly gets to grips with its myriad of perplexing strands. Is it worth investing your time? Most certainly.