The British rock legends pay homage to a dozen of their personal favourites . . . it sez ‘ere.

Reviewed by Brian McGowan, released by Cleopatra Records on 29 September 2017

In retrospect, releasing ‘Break On Through…’ as your first single, ahead of ‘Light My Fire’ seems a strange, strange decision. Still, no doubt the Doors had no choice but to accede to record label wishes. Of course, this was 1967, when all kinds of music was charting. There were no rules, no templates, no formulae.

And not an obvious choice for a UFO cover. But, almost without exception none of the songs on this album of cover versions seem obvious choices. The Doors’ track, an unlikely, but very effective marriage of an Elmore James’ blues riff to a bossa nova rhythm is as far away as you could get from the album’s opener – a cover of the Yardbirds’ ‘Heartful Of Soul’. This legendary English rock band had “launched the careers” of Eric Clapton, Jeff Beck and Jimmy Page. Yet this one has “great pop song” written through it like a stick of rock. (No surprise really, as it came from the pen of Graham Gouldman, later to write hits for the Hollies and 10CC). Beck’s signature guitar motif is replicated by Vinnie Moore here in all its proto-psychedelic, raga rock glory.

There are no step-off-the-cliff surprises in UFO’s treatments. So far, two great songs and two great bands get a reverential, attention to detail, live in the studio salute. The unadorned arrangements are perfect reflections of the music’s relatively uncomplicated sixties’ heritage.

It’s something of a jumpcut then, going from there to covers of Mad Season’s spiritual poetry on ‘River of Deceit’ and Steppenwolf’s postcard from the swingin’ sixties, ‘The Pusher’. It’s now become easy to see that The Salentino Cuts are not just rummages through the past. They are the culmination of UFO’s fascination with songs rich in narrative, commentaries on contemporary culture. Perfect vehicles for Phil Mogg’s raw, soulful vocals.

Mellencamp’s polemic on human greed, ‘Paper in Fire’ and the Animals’ “angry declaration of personal independence”, ‘It’s My Life’ are very much cut from the same cloth.

It’s something of a guilty relief then when you get to a cover of Mountain’s ode to their “Cajun Lady” on ‘Mississippi Queen’ and the illicit love of Tom Petty’s ‘Honey Bee’. Both take us back into the more familiar lyrical territory of pop and rock songs down through the years.

That said, Mogg sings with energy and passion, and reads these lyrics, no matter the cause, with a clear eye. His is the voice of experience, older, wiser, and, like the seasoned veterans they are, the band behind him is tight and sharp, sustaining all the momentum Mogg needs. 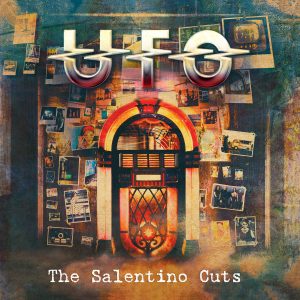