Ok, give me a hand here, watch the above video now. Right now. It’ll give me a bit of a headstart in trying to describe Twelve Foot Ninja. It’s like listening to some bizarre, one of a kind, metal/jazz/world music compilation quadruple cd found at the back of a ‘clearance’ section in a back alley indie vinyl shop in one baffled sitting…but in a good way. Yes, admittedly there is ‘humour’ in here and no, it doesn’t always work, but trust me, the music does.

For the uninitiated, Twelve Foot Ninja are a 5-piece from Melbourne who have been steadily building up a devoted following with a string of Ep’s and their debut album, ‘Silent Machine’. They recently supported Disturbed on their recent Australian tour and now release ‘Outlier’, which expands upon and magnifies everything that made ‘Silent Machine’ great. Everything is bigger, more dramatic – more riffs, heaviness, quirky diversions, it’s all here and multiplied by 10.

So, ‘Outlier’ – a perfect title: ” an outlier is an observation point which is distant from other observations”. A unique viewpoint, deliberately apart from the melee. Well exactly, they definitely sound like no-one else. Hopefully you’ve already heard the above lead track…and that’s fairly subdued. It almost feels like a warning shot across the boughs, as if it’s holding back. The next track, ‘Sick’, increases the funk and piles in with a, urm…sick riff and vocals that recall Mike Patton.

You begin to realise, midway through ‘Invincible’, when the riff drops out to be replaced by flamenco strumming, that there is a strong core of melody amidst the bludgeon and tricksiness. That however many times these songs morph into new styles, they are still surprisingly strong and cohesive. None of the cleverness or effortless instrumental prowess feels gimmicky or contrived.

It’s certainly a heavier album than its predecessor and that seems to anchor it firmly in metal territory despite its many meanders. There are shades of Korn and System Of A Down, a highly technical brutalism that you feel must involve lots of guitars with more than six strings. Yes, Djent is a somewhat meaningless term but it does describe the head spinning low key riffery here. But there is so much more and Twelve Foot Ninja do it all so well.

So elsewhere among the riffs we are treated to smooth jazz of almost Steely Dan brilliance, sun kissed acoustics and bongos, quite beautifully played piano droping into the middle of the fury of ‘Collateral’ to powerfully moving effect. ‘Point Of You’ is difficult to describe, soulful jazz moves into huge, fuck off guitars which, in turn, moves into a jazzy, proggy horns and Hammond organ section. Prog jazz shred? Who knows.

World music, Japanese instrumentation and Acid Jazz get a look in on the gumbo that is ‘Monsoon’ and that’s before we are hit with Ska, triphammer drumming, Latin grooves and more booming guitarage. We are left with the sounds of more delicate piano, a heartbeat…and frogs and crickets. Obvs. Music this individual and unusual cannot help but to be compared to the usual suspects – RHCP, FNM and Mr. Bungle, but it’s also not really like any of them. It is, however, pretty great. Damn good tunes played by a damn good band, we all need a Twelve Foot Ninja in our lives. 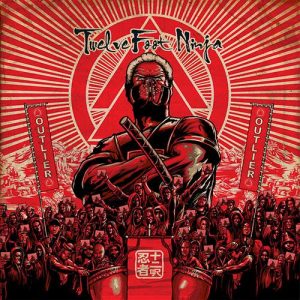