I must admit that I approached Tumanduumband’s sophmore release, Cursed With Blackened Tongues, with trepidation. I was a big fan of their eponymous debut EP (released and reviewed earlier this year) and it’s always a concern that the band won’t be able to conjure the same old (black) magic again. I needn’t have worried because it’s the same doom duo Tumanduumband only with a more confident swagger and an air of a band who are finely honing their craft.

Opening rather sedately with an elongated intro and a plodding bassline that recalls ‘Electric Funeral’ the band lure you into their world then land the killer blow and it’s indicative of the bands modus operandi. Employing lots of light and shade, quieter passages juxtapose the louder, meaning when they hit, they really pack a punch and that’s certainly the case with the EP’s title track which lumbers like a wounded giant. Some choice horror movie samples take the place of vocals and add to the sinister feeling far more than any sung words could. Like an organic Godflesh the second cut, ‘Thou Shall Burn’, creates the essence of something so vast and immovable. Like a serial killer dismembering a victim the band are in no rush and patiently build huge, brutalist soundscapes that threaten to crush the listener beneath their monolithic enormity. A lovely distorted, fuzzy bass combines with pounding drums to create riffs that are so hypnotic they knock on your cranium and aren’t leaving until you open up.

Down tuned and dirty ‘Dread Lord’ is satanic doom of the highest calibre…just don’t listen with the lights out! It’s a track that finds the band constantly and subtly shifting gears, from the rockfall opening to the closing circular riff via a crushing mid-section what holds ‘Dread Lord’ together is that classic Sabbath swing which permeates the song. Tumanduumband are a duo from Stourbridge comprising of bassist Scott Cooper and drummer Luke Orchard and those who only know them through their playing in grindcore band Vicious Bastard might be surprised at doom direction they’ve taken. However, what connects the two projects is a certain subversive element. With Tumanduumband it’s musically capturing that moment in 1969 when the hippy dream turned into the bad acid nightmare of Charlie Manson and Altamont. This is most notable on closing track ‘Drowned in Acid’, cinematic and evocative it’d make a great soundtrack to a brutal horror film. Like an anchor tied to a drowning man it totally encompasses the listener with no hope for redemption.

Cursed With Blackened Tongues finds our doom duo taking a more darker direction. More measured than their debut EP it finds Tumanduumband on the upswing and I hope their next move will be a full-length album. 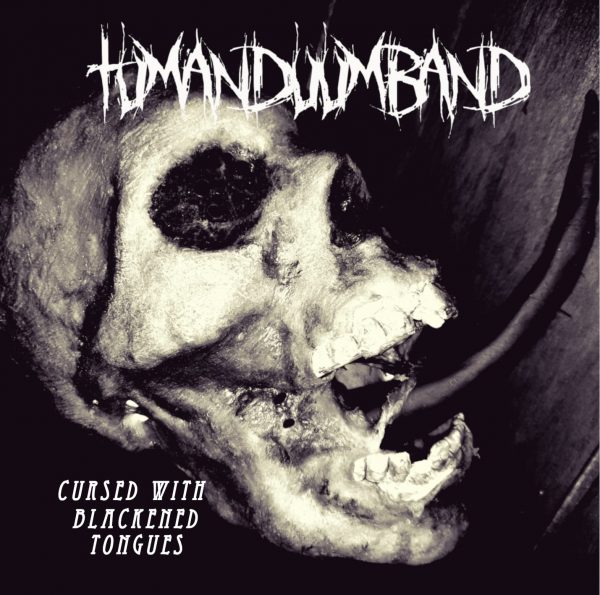