Troy Redfern’s been an industrious individual in recent years, touring both with band and solo, alongside regular album releases. His latest album, The Wings Of Salvation, finds him amidst a familiar slide-fest of blues guitar rock, more of the odd glam affectations we heard cameoed last time round, plus a general broadening of his musical scope. This is achieved by utilising the tried and tested power trio format with himself on vocals and assorted guitars, Paul Stewart on drums, and Dave Marks earning his money on not only bass, but keyboards, banjo, and assorted other bits and bobs.

Recent single ‘Gasoline’ opens proceedings full of sassy swagger, being something of a Southern rock freak-flag waving Black Crowes affair with its hook laden upbeat lyrics, as they look out towards a positive future, while a dirty slide workout also gets a look-in. Things keep on the up with the paean to liberated womankind in ‘Sweet Carolina’. It’s a hefty 70’s Stones stomp of sound with a Bolan tongue-twisting vocal delivery, while not being too dissimilar to a metalled-up version of Humble Pie’s cover of ‘99 Pounds’, and again a solo that finds space to breath elsewhere, and nicely too.

‘Come On’ may be more familiar blues boogie territory, but I’m also hearing further glam rock influences beyond T. Rex, notably Slade in the crowd-like affirmative singalong aspects and Silverhead, by way of the rough-voiced but higher singing and slide work responding to that.

A trio of rockers having set us up, ‘Navajo’ branches out musically, with blues, some country picking on electric, and evocative tempos, but the real interest here may well be as we begin to appreciate Redfern’s lyrical bent, building on the Western mythos he’s created here he narrates in song the plight of America’s indigenous race. ‘Mercy’ follows thematically, a tale of doomed love played out over a low moving blues rock riff widening to a more uplifting Crowes singalong chorus. The use of organ delivers a redemptive church flavour, while halfway through some impressive guitar heroics make you take notice. From the personal to the world weary, we get ‘Can’t Let Go’ and how events play out on via modern media – there’s a big bass drum beat alongside deep-ended guitar and some mournful sung yet spiritually uplifting “whoa whoas” heard and a lengthy slide excursion that sails far and wide.

Again, lyrically, ‘Dark Religion’ draws the listener in. Chords shimmer building in cinematic approach, not unlike The Waterboys in spirit; it tells the story of a girl looking for something better in life only to be disappointed. Regarding ‘Profane’, Redfern has likened it to “Frank Miller and Robert Rodriguez’ Sin City meets the punk energy of The Damned”. As someone who’s resolute that Sin City’s a fantasy-fetish take on Jim Steranko’s graphic novella Chandler I agree with the Damned comparison as it bops heartily with both a sense of grace and danger to the lyrics narrated.

Underpinned with a tribal voodoo beat and brooding rhythm guitars, Down’s verses simmers with tension before exploding headlong into its supercharged chorus. The harmonised vocals of middle eight almost feel ethereal, before it jumps into a slash and burn guitar solo. Rocking blues riffed over a tribal beat, alongside quieter moments, ‘Down’ is a Southern gothic song, while final number ‘Heart & Soul’ takes us to the roots of the blues like some sharecropping Leadbelly country blues, featuring as it does both a hefty clap of rhythm, and some deeper gravelly voices. As with other numbers, over its duration it also takes us elsewhere, evoking the qualities of a film score.

Some lively rockers illicit our more immediate attention on The Wings Of Salvation, but it’s Redfern’s steady growth as a songwriter that has a longer lasting appreciative effect. He’s building his own narrative mythologies and they are becoming ever more intriguing aurally. 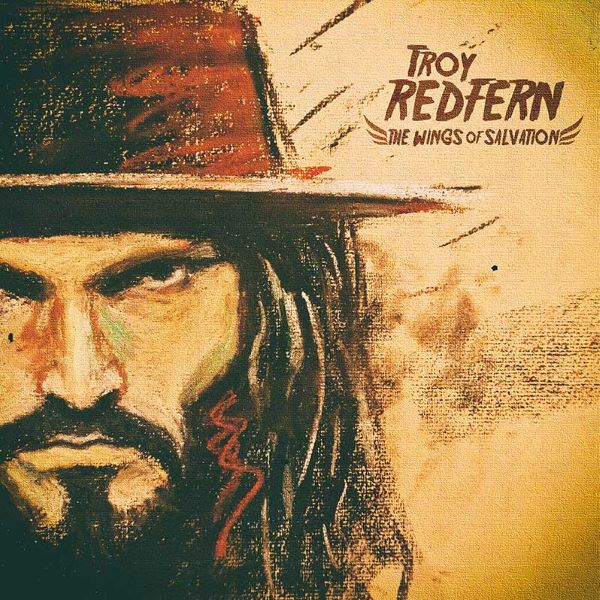