The Trinity Live series of charity events originally began when a triple bill of some of the UK’s then best progressive rock bands had to be cancelled when Christina Booth, excellent vocalist with Magenta, was diagnosed with cancer. In response a one day festival to raise money for cancer charities was arranged by members of the bands, including Matthew Cohen of The Reasoning and Adam Hodgson of Touchstone, and as Christina, thankfully, continued her recovery, she made an unforgettable and emotional appearance at the show. Trinity has continued, and after a show in London in 2018, returned to the Assembly for this year’s event. While the previous three events were to support cancer charities, this year the Trinity team changed their focus to Mental Health issues, specifically the charities MIND and Help Musicians UK. After the initial announcement, the organisers were hit by a couple of cancellations, which meant that right up to a few days before the show, the bill was still being confirmed. Under the circumstances, though, they still managed to do their usual excellent job.

1 o’clock on a Saturday afternoon is a most un-rock and roll hour to begin a show focused on Progressive Rock, and with people still filing into the hall, but that was the task facing THE C:LIVE COLLECTIVE , a band put together by former Twelfth night member Clive Mitten. Regardless of the circumstances, the band made a pretty decent start, putting together a set of Twelfth Night songs, albeit putting their own stamp on the music. You could argue that they used a few too many samples in their set, especially when it meant the individual members were sometimes standing  around while these came over the PA, but my biggest reservation about their set was that much of it, and bearing in mind that they only had a 30 minute set, was given over to ‘ Love Song’ and ‘We Are Sane’, which, are slow, atmospheric, and almost gothic in feel. Excellently played and well worth hearing in another context, and if there’s an audience that will buy into this sort of thing, it’s a Prog audience, but while it didn’t really suit the time or the place, the band got a good, even enthusiastic reception.

Prog Magazine Editor Jerry Ewing acted as MC and compere for the day, and introduced the next set as being by ‘Officially the Most Adorable Man In Prog, not just any Joe Payne, but THAT JOE PAYNE’. The former vocalist with The Enid, now going solo, Joe was one of the late replacements, and however much notice he’d had beforehand, he gave us a fascinating set. Accompanying himself only on piano, plus assorted loops and samples, this gave him the opportunity to use his immense vocal range properly, in a way I can’t remember him having done in the Enid, including a falsetto note at the end of ‘What Is The World Coming To’ that may have been the highest note I’ve ever heard sung live. His opening song was based around Beethoven’s Moonlight Sonata, and set the tone for a set of long, complex songs, that while they sometimes seemed they would have fitted in more with the Weimar Cabaret than a Prog Festival, the reception he received at the end showed how well it had gone down. 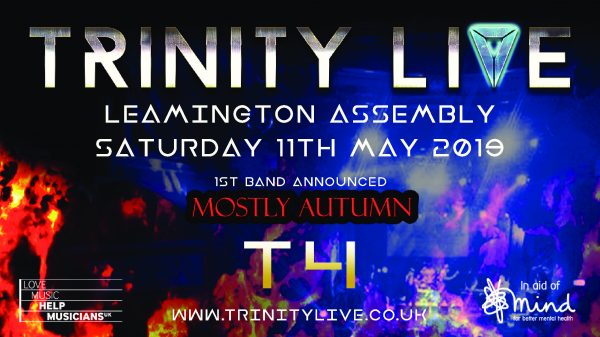 Hailing from the Prog stronghold of South Wales, LAST FLIGHT TO PLUTO provided the last set before the mid afternoon break, and turned out to be one of the best bands of the day. A six piece with three guitars, their second album, ‘A Drop In The Ocean’ was pretty impressive on its first couple of listens, and I was looking forward to seeing how this sounded live. You have to like a Progressive Rock band that includes rap and electronica sections in its opening song, and the interplay between the guitars through most of the set was very reminiscent of the likes of Thin Lizzy and Wishbone Ash, rarely a bad thing. Alice Freya’s vocals were good too, although she did occasionally have to fight to make herself heard above the band. The one criticism of the band might be that they do lack a focal point, with Alice being one of the three guitarists and the band as a whole were a bit static on stage. There was never really anything to catch the eye, apart from the singer, you wanted one or more of the band to come forward and engage the crowd a little. Aside from that, this was a fine set, from a really promising band.

Officially, after Last flight to Pluto’ set, there was a break in proceedings in the main hall, but for those who wanted something a little different, OLIVER WAKEMAN presented a couple of solo piano performances alongside a Q & A session with legendary album cover artist, RODNEY MATTHEWS. Oliver played some of his solo work, including songs for his wife and daughter as well as something he wrote for Rodney’s wedding, while telling us some of the background for each song, while Rodney answered questions about his career and his favourite pieces of work. The session might only have lasted around 35 minutes, but it was a fine addition to the festival and I think everyone who attended one of these sessions enjoyed it.

During part of Oliver Wakeman’s session, he was having to talk over the sound of ALAN REED AND THE DAUGHTERS OF EXPEDIENCY soundchecking in the main hall, although the programme of events had changed slightly as part of the raffle was held as people were returning to the hall. As ever at Trinity, there was a fine selection of items that had been donated by various artists, including Steven Wilson, Flying Colours, Big Big Train, IQ, Marillion, Rick Wakeman and many others. Finally Alan Reed’s band began their set with a rousing ‘Kingdom of the Blind’ and proceeded to turn in one of the liveliest and most focused sets of the day. The band played several songs from the forthcoming new album, a lot of whose lyrics seemed to have a pretty cynical view of the world, which Reed expanded on as the set went on, with the band playing really well behind him. Almost as if to make up for giving the crowd a lot of what might have been unfamiliar material, he rounded off the set with two classic Pallas tracks, ‘The Executioner’ and ‘Crown of Thorns’, which earned a deservedly huge cheer from the crowd.

GODSTICKS have now expanded to a four piece since I first saw them as a trio some years ago and the band have built their reputation slowly but determinedly, although on this occasion it was sadly noticeable how the crowd had thinned out after The Daughters of Expediency and a further installment of the auction had finished, as Godsticks were probably something of a challenging listen for those who prefer the more conservative areas of prog. The band are appreciably heavier than each of the other bands on the bill, and they also have a liking for often unconventional song structures and even more unconventional time signatures. There was also the possibility that many, who perhaps weren’t familiar with the band, chose this point in the proceedings to seek out something to eat or take a break from the hall. However, for those of us who chose to stay, it was easy to be impressed by the band’s ambition and sense of adventure, not to mention their excellent musicianship.

After Godsticks had finished weaving their complicated songs, it was time for the main item in the auction to be offered up for bids, a PRS SE Custom guitar, with personalised artwork, played on stage with King Crimson, autographed and donated by Jakko Jacsyck. There had been a couple of early bids but these were soon passed by bids from the audience in the hall, and eventually the guitar went for the handsome sum of £1550, a fine addition to the overall takings for the day.

And so to the day’s headliners MOSTLY AUTUMN. It seemed to take a long time for them to set up, mainly because of the vocal mics refused to work, but as Iain Jennings’ majestic keyboard intro to ‘Sight Of Day’ filled the hall, it didn’t take long for the band to hit form. ‘Sight of Day’ is a lengthy song, with several distinct parts, but also a lot of the classic Mostly touches, including Bryan Josh’s shimmering guitar. After that came ‘Simple Ways’, which I’ve always thought was one of the band’s best but most underrated songs, but now with a new, more keyboard dominated arrangement, then a fine version of one of the staples in the band’s set over the years, ‘Evergreen’. Of the newer songs ‘Changing Lives’ stood out, chiefly because of Chris Johnson’s lead vocal, before the set ended with the title track of the new album, ‘White Rainbow’, another lengthy multi part piece. The album hadn’t been out long at the time of the show, and it felt that it was a little too intense and complicated a piece to judge properly on first listen, although it was excellently played and sung. The combination of new songs and old favourites gave the set a good balance and in the end it was a nice way to finish the day’s music, leaving only Jerry Ewing to make a closing speech and the audience to give a well deserved round of applause to the organisers, Matt Cohen, Adam Hodgson, Steph Ferrer and their team of assistants and stage crew. As usual it was a superbly organised event, with a great atmosphere and some fine, fine music.

More details about the Trinity Live shows are on their website, including how to make a donation to the charities. Meanwhile, Trinity 5 has already been announced, to take place on May 9th, 2020, with the initial line up announcement causing some excitement at the gig. Not only are the excellent Magenta due to appear, but also the new line up of Touchstone and the Trinity debut of Omega Point, the new band featuring former members of the mighty Reasoning. A headliner and the rest of the bill are still to be announced, but it already looks like a definite date for the diary.