Influences. We all have them, but I guess in music, as in life, it’s not how big they are but what you do with them that counts. I must put my hands up at this point and admit to not having heard of the band until now. This despite their latest release being their fourth, having supported the Stones at Hyde Park in 2013 and them being (and this is what endeared me to them) – and I quote – “Antwerps Loudest Band”!

And loud they are! ‘Game’ kicks off with a howling, atonal riff before settling into a scuzzy, crunching industrial blues – a raw sound completely at odds with their sharp suited image. It’s an unusual sound, or perhaps it is just the juxtaposition between the sound and visuals that wrong foots you. It’s heavy, punky, fuzzy and slightly poppy. There are shades of….

Well, let’s deal with those shades. At least half of this album drowns under the weight of those aforementioned influences. Zep and QOTSA are huge, writ large over several songs. As is grunge. Songs end with shrieks of abused instruments and Cobain screams, ‘Black Panic’ in particular sounding like two similar Nirvana songs stapled together. Elsewhere we have distorted ZZ Top boogies, hints of Muse, Cult-y/Doors-y goth nuggets and songs that would fit perfectly alongside anything on Bowies ‘Scary Monsters’.

But there are also songs where the influences are inhaled and ingested rather than being worn as a badge, and this is when Triggerfinger sound like…well, Triggerfinger. And this second Triggerfinger is a very different beast. A quirky alt-rock creation that fits with the look. Odd, daring, risk-taking pop rock that has a personality all of its own. Existing in a Wonderland where handclappy guitar pop gambols hand in hand with pulsing, atmospheric whispered menace across fields of multi-hued fuzzy rocking curveballs.

So, an album that doesn’t quite work by a band that hasn’t quite figured out who they are. But they are getting there. They haven’t quite nailed their sound yet but once those last few pesky influences have been absorbed then Triggerfinger will be a genuinely interesting proposition. As actors say, you need to learn your lines in order to be able to forget them. Hopefully that’s what’s happening here and album No.5 will be the defining statement. 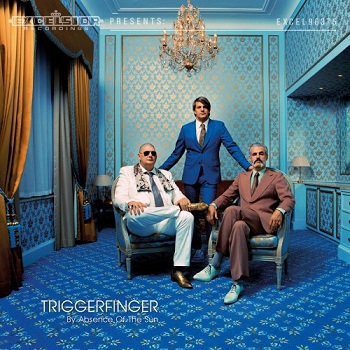