Artistically, Treat‘s recording career appeared to peak with 1989’s Organised Crime, but their 2010 post-reunion album, Coup De Grace is one of the finest examples of Melodic Rock that you are likely to encounter. Its commercial success perhaps provided the confidence to write and record 2014’s Ghost Of Graceland, reportedly an exercise in genre skewing, but in reality, its width and depth of new found sophistication – try out ‘Endangered’ and ‘Nonstop’ – doesn’t distance it too far from their previous work. Tracks from these 3 albums are liberally sprinkled throughout this live set. Plus one from Dreamhunter (1987) and one from Scratch & Bite (1985).

Given such a rich back catalogue, the rock reviewer’s cliché – all killer, no filler – rigidly applies. There’s never any place for the faux epic, lurid melodramas of lowest common denominator melodic Rock with this band. Big, bold, memorably melodic songs, like ‘Ready For The Taking’ and ‘Paper Tiger’ are full of raw, emotional urgency, sweetened by swathes of orchestrated keyboards and fluent axework that swings from nuance to clang in the space of a chorus. Sharp songwriting and towering hooks are intensified in the live setting. Bands with genuine talent sound like a million bucks, no matter the circumstances.

When they truly nail it, as on the arena ready ‘Roar’ and the exotic ‘Skies Of Mongolia’, it’s an immersive, fully realised live music experience. And even when they dial it down, as on the hermetically sealed AOR ballads, ‘Do Your Own Stunts’ and ‘We Own The Night’, you can sense an almost palpable melancholy undertow that would be lost to us among the hard edges of your modern, digitally equipped recording studio.

Essentially then this is the band’s newest Best Of… compilation, done live. Their previous collection, Weapons Of Choice, was released in 2006, when there was no Coup De Grace, and No Ghost Of Graceland. Time To Catch Up. 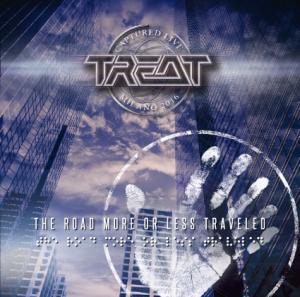