Touchstone’s breakthrough album Wintercoast saw the band making giant leaps forward whilst their 2011 follow up The City Sleeps marked a subtle shift towards a more rock oriented sound. Oceans Of Time is the fourth album from Touchstone and is undoubtedly their heaviest and most guitar driven album to date but it also displays a more nuanced and mature approach at times.

‘Flux’ is a heavy and high octane opener, fuelled by Adam Hodgson’s metallic riffs and battered home by Henry Rogers’ powerhouse drums. It all dissolves into Rob Cottingham’s choral keyboards and a solo vocal from Kim Seviour halfway through before building back up again to a climax. Touchstone fans will lap this one up and the song should sound fantastic played live. ‘Contact’ is one of the highlights of the album for me with a stripped back feel that allows the rhythm rather than the riffs to power the song.  Even better is ‘Tabula Rasa’, built around Hodgson’s jangly guitar refrain and underpinned by Moorghen and Rogers fluid and expressive rhythms.  It’s a superb and intelligently arranged song crowned by a soaring solo from Adam Hodgson and a gorgeous vocal from Kim Seviour. For me it’s one of the finest things the band has done. 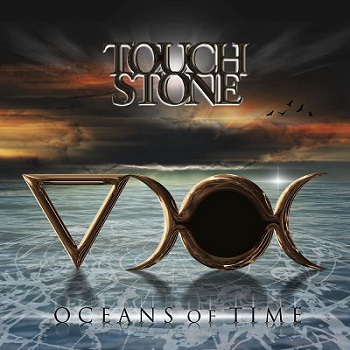 John Mitchell’s production is crisp and precise throughout but it’s the songs that take centre stage on Oceans Of Time with solos kept to a minimum. Rob Cottingham plays a more supportive role on this album with his first prominent lead vocal appearing on ‘Shadows End’ six tracks in. Perhaps the major revelation on the album though is Kim Seviour. She has always possessed a strong crystal clear voice but here she displays a much greater depth, both in range and emotion, than we have heard before.

Not everything on Oceans Of Time hits the target though. ‘Fragments’ leans towards pop and despite several plays it’s a track that I just can’t get into. Maybe it will grow on me with time! The inclusion of a re-recorded version of ‘Solace’ (from Wintercoast) also seems a strange choice, although it’s undoubtedly an excellent song and it could be argued that the version here surpasses the original. Perhaps it’s an attempt to introduce the song afresh, or to present it in a different way, but set amongst a body of all new material it seems incongruous and I feel it would have worked better as a bonus track. But these are minor quibbles, Oceans Of Time is another strong album from Touchstone which shows that the band is continuing to develop and evolve.  Existing fans will find much to love here and the heavier, guitar driven material should appeal to a younger audience, although for me it’s the more subtle tracks on the album that are the most rewarding.

Touchstone’s six date tour to promote the album ends right here in the Midlands with a gig at Bilston’s Robin2. It promises to be another special evening.