In the spring of this year, it was announced that this particular line-up of Touchstone would be placed on hiatus, with singer Kim Seviour’s health problems putting the immediate future of the band in doubt. Although their appearance at HRH Prog, in North Wales, was billed as the band’s farewell, eventually they announced that this line-up would finally call a halt with two ‘Farewell’ shows in London and Leamington, and not long after, keyboard player/vocalist Rob Cottingham announced that he had decided to end his time with the band, as if emphasising that this era of the band would be coming to an end. Announcing some attractive supports in the shape of Magenta and Lonely Robot merely added to the sense of occasion, and helped draw a sizeable crowd to the Assembly.

With three bands on the bill, two of which were filming their sets, it meant an early start time, but as the queue grew outside the venue, on the coldest day of the winter so far, the advertised door opening time of 4.30 came and went, until Touchstone bassist Moo came outside to explain to the queue that there had been serious technical problems, and that the public would be allowed to muster in the warmer confines of the adjacent Zephyr Lounge. Fair play to the organisers for this gesture, and to Moo as well, for coming out to explain personally. Eventually almost as soon as the audience were allowed into the venue, the opening act, Lonely Robot, were on stage.

Lonely Robot is a project begun by guitarist John Mitchell (It Bites, Arena and several other projects), which released an excellent album earlier this year. There’s a full band show showcase of the album in London in December, but for this gig it was just John Mitchell on guitar and keyboardist Liam Holmes. The early part of the set seemed a little awkward, as I suspect a lot of people weren’t quite sure what to expect (I gather the set in London the previous night wasn’t exactly an unqualified success), and a cover of ‘Life On Mars’ did little to raise the bar. Even the best track on the album, ‘Construct/Obstruct’ didn’t work in this setting and Mitchell himself confessed he wasn’t a big fan of acoustic sets, but then he introduced Heather Findlay, who’d done a superb job on a couple of the album tracks, to sing ‘Why Do We Stay’ and all was right with the world. It’s a fine, fine song, brilliantly sung by both vocalists. This lifted the crowd and the atmosphere, a cover of Peter Gabriel’s ‘Here Comes The Flood’ had everyone joining in and at the end, Mitchell reintroduced Ms Findlay to join in a cover of Phil Collins’ ‘Take Me Home’, which put the seal on what eventually turned out to be an enjoyable set. Rumour has it, not least when it was let slip by Mitchell mid set, that he and Heather will be playing more shows together next Spring.  Definitely something to look forward to.

The last time Magenta graced the stage of The Assembly was in the excellent Trinity Live charity show in May 2014, which was Christina Booth’s first show after returning from illness, and after a fine gig at the Robin last June, they looked good on a bigger stage with an excellent light show. Sod’s Law worked so that because the band were filming the set, there appeared to be a number of technical problems, with the band appearing to regularly ask for adjustments to the mix in their in-ear monitors, until midway through the set, during ‘Devil At The Crossroads’, the band were obliged to stop as a huge bass drone came out of the PA. Typically, Christina Booth found the humour in the situation, dryly remarking to Rob Reed that he was going to have some editing to do, before the band resumed. They didn’t let it get the better of them, though, Chris Fry got the song back on track with a superb guitar solo, as the band elected to continue from where they stopped rather than restart what is quite a long song. As for the rest of the set, it was typical Magenta, meaning that everything was beautifully played and sung, and even though the music can be intense and complicated, there’s always humour on stage and a lot of engagement with the crowd; just some of the reasons why a Magenta gig is such an enjoyable place to be. I’d have liked some more of their shorter songs in the set, but when you’re listening to songs as good as ‘Pearl’ with yet another brilliant solo by Fry, and an even better vocal from Ms Booth, and the encore of ‘The Lizard King’, then that’s mere quibbling.  A great set from one of our best bands, who really ought to play live more often. 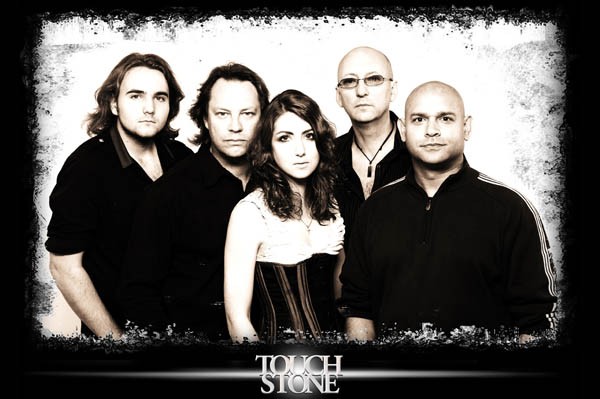 And so to Touchstone’s farewell, and again the curse of the DVD shoot had made itself known. In the days before the gig, singer Kim Seviour began suffering from laryngitis, so much so that, as she put it herself, ‘my upper register has just flown away’.  Having toured with the band and worked with Rob Cottingham on his solo album, Heather Findlay was contacted and stepped into the breach with only 24 hours’ notice. It may have been a decision made out of desperation, but it worked almost better than the band could have hoped. Kim wasn’t sidelined at all, she sang what she felt comfortable with, while Heather almost hovered, obviously trying to give Kim the limelight, while being prepared to step at any minute and taking over the higher parts. It was a very unusual situation that I can’t remember ever having seen before. Equally, Kim was obviously determined not to let the situation get the better of her, and she was a very lively stage presence, frequently trying to get the crowd involved in what she called ‘hellish pantomime’.

The set was composed of songs from across the bands career, as Kim was careful to note, starting with ‘Discordant Dreams’. As with Magenta, there were a few issues with the sound, with Rob Cottingham’s keyboards being less than audible for most of the set from where I was standing, but  was good to hear some of the older songs again, especially ‘Zinomorph’ and ‘Mad Hatters’. Adam Hodgson in particular was playing his socks off on guitar throughout the set, as if he wanted to rise to the occasion. If the main set only lasted just over an hour, no doubt for a number of reasons, including Kim’s voice and the late start, a lengthy encore of ‘Wintercoast’ and ‘Mad World’, with John Mitchell joining in on guitar, more than made up for it. Considering the circumstances the band performed under, it had been a brilliant effort from the band, with particular mention for both singers. It can’t have been easy for Kim having to step aside at times and listen to someone else singing for her, whereas for a talented frontperson like Heather, it must have been equally as difficult to spend a set waiting on the bench, as it were, not wanting to steal the limelight, but ready to step in at a moment’s notice, which in the end didn’t seem to happen, whatever parts she did take looked to have been arranged in advance.

In the days after the announcement that the band were to be put on hiatus, it was widely thought that it was the end for the band, but as the band took their bows, Moo said that he, guitarist Adam Hodgson and drummer Henry Rogers intended to carry on and  they had some recruiting to do. They’ll be back, but it will be interesting to see where Kim Seviour and Rob Cottingham appear next. Farewell, then, this incarnation of Touchstone, you’ll leave some good memories behind.