Toto‘s appearance at the Montreux Jazz Festival in 1991 was the culmination of a few low key gigs, testing out the new material they’d written for their forthcoming studio album, Kingdom Of Desire (1992), but the recording was never released in any form. The band were unhappy with the sound quality, and the Festival owned the tapes. Stalemate. Twenty five years later, Eagle Vision bought the rights and Lukather reworked the sound. His words – “The room is live and loud and you can’t hide shit when the room is loud, so what you’re hearing is real… we spent a week remixing and rebalancing stuff and making it sound BIG”.

Kimball, Frederiksen, Williams and Byron were all long gone. Shrunk to a foursome – Lukather, Paich and the Porcaro brothers – the band sounds lean and focused. For years Lukather had been blasting out radical harmonies and intense overlays behind one of those previous four frontmen. He knew what it took to perform. His voice has soul, he keeps a tight rein on the vocal melodies and he delivers with emotion and conviction.

The short setlist is fleshed out with elongated edits of songs from Kingdom Of Desire, along with some of the band’s better known material and a couple of telling covers. It runs to 70 minutes. Paich conducts, Lukather performs and the Porcaros define the dynamics. Easy really. And the elegant grace that runs through Toto’s music can be clearly heard, above the crowd noise, above the thundering rhythms and Lukather’s stinging solos. ‘Africa’ never ceases to impress, and visibly demonstrates the contribution made by back up vocalists Jaccie McGhee, Fred White and Jenny Douglas. ‘Jake To The Bone’, from Kingdom Of Desire, is the perfect fit for the MJF. The song’s mix of design and spontaneity, illusory or otherwise, chimes nicely with the Festival’s universal jazz aesthetic. A cover of Hendrix’s ‘Red House’ gives the band – especially Lukather – the opportunity to let their hair down and indulge in the unfettered, full throated roar of blues based rock’n’roll.

Lukather’s rejigging of the sonics works well. Yes, the are a few bumps and bruises, but that’s what live is. It’s also something of a bizarre historical document – Jeff Porcaro died the following year, 1992, and brother Mike in 2015. This was their last recorded live performance. 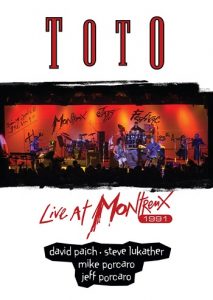