Twelve months on since Black Sabbath finished their final tour with hometown shows here in Birmingham the bands profile remains high. There was the pre-Christmas multi-format release of The End: Live In Birmingham, which documented that last performance, and also included a CD of songs recorded in the days that followed. And, as reported in our other article, Geezer Butler was at Villa Park last weekend to be awarded his star on the Broad Street Walk of Stars, becoming the third member of the band to do so. During the half time pitch side presentation ceremony, Geezer was joined by none other than Tony Iommi and Midlands Rocks was delighted to get the opportunity to have a few words with the Lord of Riffs. 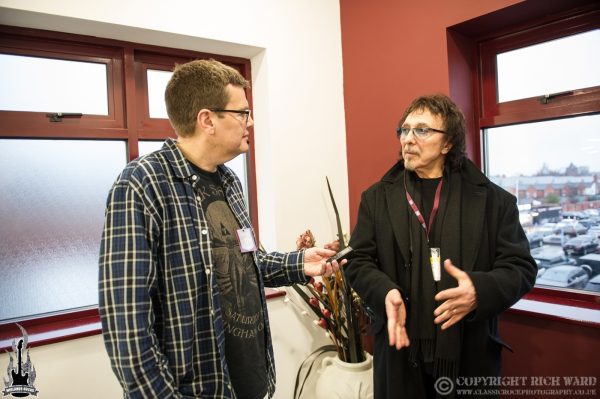 MR: Tony, it’s great to see you here today to support Geezer. He’s now the third member of Sabbath to get this award after yourself and Ozzy and its recognition that is long overdue…

Absolutely I wouldn’t have missed this, not at all. I’m very pleased for Geezer that it’s taking place here because Aston Villa has been such a massive part of his life. He’s very shy and normally doesn’t do stuff like this but by having it take place here at Villa Park they managed to get him to come out and accept it. As I said I’m really happy for him and finally he has got his star which is much deserved.

MR: It’s been twelve months now since the final shows at Genting Arena. What was going through your mind as the tour came to a close?

It didn’t hit too much until the last shows really because it felt it was going to be almost like we had always done – finish the tour, go away and then get back together a few weeks or months later and start to make plans for the next one. And so it sort of felt like that but it didn’t if you know what I mean. There was that side to it where you suddenly thought “hang on a minute this is the last time we will be playing this song” and so that was when it really started to hit home. 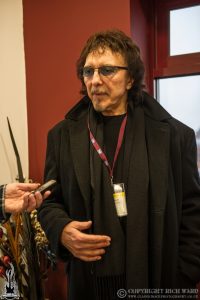 MR: It wasn’t quite The End of course as you actually did some recording immediately afterwards…

Yes, fortunately for us right after the last Birmingham show we went in the studio for a couple of days to record. I thought it would be a good idea for us to set the gear up and just play in live in the studio like we used to and just tape it – good or bad. And so that’s what we did. And it was great to get a chance to do that and to be able to get Ozzy to sing some songs that he hadn’t done for a long time.

MR: The songs that were released…’The Wizard’, ‘Wicked World’, ‘Sweet Leaf’, ‘Tomorrow’s Dream’ and ‘Changes’…were not part of the set list for the final tour. Would you have liked to change the set list around more?

We wanted to do other stuff that we hadn’t played for years but you could only do what Ozzy can sing. And back in the day he sang them so high that there was no chance of that and he didn’t want to sing them in a different key. And then when we were in the studio after the tour had finished he could just let go and really go for it, which he was quite happy to do. When we were on tour he would always be worried about making sure he could get through the next show. He would be thinking if we do these songs it’s too high and I will strain my voice so we might have to cancel the next show. On tour you have to do it every other night and it was hard at our age to do that. But by doing it by going in to the rehearsal room he could do it because we had finished the tour and it wouldn’t strain his voice. So we tried to avoid that happening and that was why the set list became what it was.

MR: A few years back yourself and Geezer had the opportunity to get back together with Ronnie James Dio and play songs from Heaven and Hell and The Mob Rules aswell as recording a final album – The Devil You Know – with Ronnie singing. There is still a lot of love for those records from that era of the band…

I know there is, people often mention those albums to me. And that tour for us was going great, the album did well and everything was looking really good. And then I spoke to Ronnie on the phone after he got ill and it was very sad. And I called him to wish him Happy Birthday and he said to me “Oh I don’t worry about birthdays anymore; I’m old enough for everybody”. Without him in this business it leaves a huge hole.

MR: Ronnie was an incredible singer wasn’t he?

He had such an amazing voice he could just do stuff that was so natural to him and he would never warm up. He had a different regime to everybody else, like Ozzy for example he always warms up before he goes on stage. But with Ronnie he could be sitting here talking and having a drink and then he could go straight on stage, no warm-up and sing like he was like a super hero. And certainly he is very much missed and the world of music is much worse off without him in it…there are some great singers out there but Ronnie was certainly one of the very best.

MR: So how have you spending your time since the tour finished; are you enjoying having a good rest?

Rest! I thought after this tour well now I will get time to just relax and do some stuff that I had always wanted to do…but it hasn’t happened yet! I don’t know what it is, the time is just flying by and I think because of all the years of not seeing my friends that often it has got to the stage now where I see them a lot. And we moved house, and we met a new group of friends and so we have the old friends and the new friends and we just seem to be doing more than ever.

MR: Are you thinking about any sort of music related activity at the moment?

Music wise I would certainly like to start writing again but at the moment I’m doing a lot of stuff for charities, Heartlands Hospital, which is part of the Heart of England Foundation Trust, and also Wythall Animal Sanctuary and both of those are very dear to me. I just try and help where I can and with the Hospital Trust at the moment we are trying to raise some money to buy some beds for the chemo patients. And so that is something that I very much like to be involved with; you see the nurses and the doctors they work so hard and they don’t get a lot of credit for it and when you’re in there they are all so committed and it sparks me off and so that’s what I’ve been spending some of my time doing.

Thanks to Tony for kindly agreeing to be interviewed at very short notice. Both Tony and Geezer signed a copy of the double Ultimate Collection CD which we are raffling in a charity auction to support the Heart of England Foundation Trust. Click the link here to make a donation and be in with a chance of winning 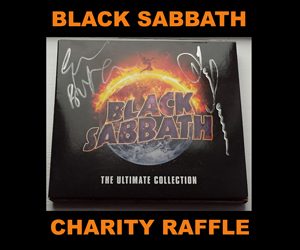