This was Tony Iommi’s second time at the Town Hall for an ‘in conversation with’ evening. The first one being a couple of years ago and which gave the hint that Sabbath’s final shows would take place in Birmingham. Of course, those triumphant shows were well over a year ago, so it’s a perfect time to bring the story up to date.

As before, the stage is simple; one chair for Tony and the other for his interviewer and long time friend Gary Newbon. The format is similar to before with the first half of the show being the formal interview, and the second opening up the floor to questions (albeit having been sent in on Facebook beforehand). Many of the stories are familiar and most the fans here have heard them in some shape or form before and are also on hand to correct and jog the memories of both Tony and Gary (who admittedly is more accustomed to sports interviews). Some of the stories never fail to amuse (Tell me about the time you set fire to Bill Ward), but there were some new ones to me, for example the story of Ron Keel’s audition for the band after Tony had heard a tape of his singing. When Ron turned up for the audition Tony explained that he liked a certain track and played it back to Ron, only for him to explain that his songs were on the other side of the tape. 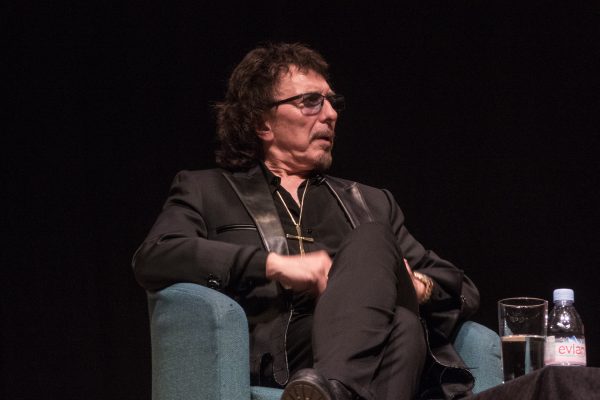 Lighthearted throughout, but at times touching on the darker times; the passing of Ronnie James Dio and his own cancer battles, it also highlights the superb charity work Tony has been doing. Two months ago he hosted a meal at Birmingham restaurant Opus which raised £25,000 towards the Birmingham and Solihull NHS trusts, and he continues to be a patron of Wythall Animal Sanctuary.

Of interest to those that weren’t there are the projects that Tony potentially has coming up. Talk of an album with Brian May looks likely – something they have both been wanting to do for a long time. He also mentioned the possibility of working with Rob Halford. Also during the evening on more than one occasion he comments on how much he enjoyed working with Tony Martin – so that also poses an exciting option. (The Cozy Powell memorial evening at The Robin in December may be an ideal start -hint). He also didn’t rule out the odd Sabbath date. So while Sabbath’s touring days are now firmly behind them, Tony certainly is not thinking about retiring.