Recorded 2009 in Akron OH, this special concert was released on crystal clear DVD and CD last year and now has been pressed on deluxe rainbow swirl vinyl! 2LPs in a gorgeous gatefold jacket featuring images from Todd Rundgren’s truly epic multi-media concert event – a front-to-back recreation of his enormously popular and influential 1973 album, A Wizard, A True Star! 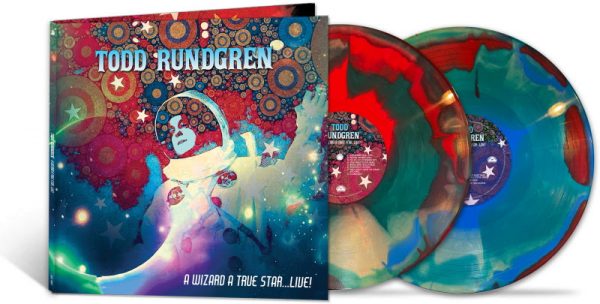 Track List:
LP1 SIDE A
1. International Feel
2. Never Never Land
3. Tic Tic Tic It Wears Off
4. You Need Your Head
5. Rock and Roll Pussy
6. Dogfight Giggle
7. You Don’t Have To Camp Around
8. Flamingo

LP1 SIDE B
1. Zen Archer
2. Just Another Onionhead-Da Da Dali
3. Sometimes I Don’t Know What To Feel
4. Does Anybody Love You

LP2 SIDE B
1. Is It My Name
2. When the Shit Hits the Fan / Sunset Blvd
3. Le Feel Internacionale
4. Just One Victory

A Wizard, A True Star. The title of Todd Rundgren’s 1973 solo album aptly foreshadows the contributions of this multifaceted artist to state-of-the-art music. As a songwriter, video pioneer, producer, recording artist, computer software developer, conceptualist, interactive artist, and author, over the past 50+ years Rundgren has made a lasting impact on the form, content, and delivery of popular music. His seminal album Something/Anything? (1972), on which he played all the instruments, sang all the vocal parts and acted as his own producer, catapulted Rundgren into the superstar limelight, prompting the press to unanimously dub him “Rock’s New Wunderkind.” His 21 solo albums, plus 14 with his prog rock/power pop ensemble Utopia, spawned such hit singles as “I Saw The Light,” “Hello It’s Me,” “Can We Still Be Friends,” “Bang The Drum,” and with his band Utopia, “Love Is The Answer.” As a producer, Rundgren has brought his creativity to bear on nearly one hundred albums, including with Patti Smith, Cheap Trick, The Psychedelic Furs, The Tubes, XTC, Grand Funk Railroad, Hall & Oates, The Band, and Meat Loaf’s 50-million-selling Bat Out Of Hell.