The fans who’ve been with Thunder since Terraplane will have all these tracks, except of course for the 2019 versions of ‘Future Train’ and ‘Low Life In High Places’. But it’s good to see them assembled into a 30 plus tracks tour de force… a hard rock CV that should convince any Hall of Fame to insist on the band’s immediate entry.

January’s Please Remain Seated revealed a reinvigorated band at the peak of its very considerable powers, with guitarist/songwriter, Luke Morley and vocalist, Danny Bowes in top form. The Greatest Hits reminds us where they came from and how they got here. All 12 studio albums are represented, with the addition of a couple of bonus tracks. There’s the usual suite of hard copy variations: a 2 CD version, a 3 CD version and a 3LP version.

If anything, what the compilation confirms is that despite their relative success, they were a band out of time. Ten years earlier, they would have been up there with Whitesnake and Def Leppard. This carefully curated selection assembles enough truly affecting moments among its strums and stomps to illustrate that, time and time again. Their crunchy, poetic twist on stadium rock with ‘Dirty Love’ and ‘Like A Satellite’, and their occasional immersion in soulful, low key torch balladry, with ‘A Better Man’ and ‘Love Walked In’ being prime cases in point.

And as a band forsaken by flannel clothed fashion, those first few albums also had to negotiate their way through the endgame of corporate rock. And you’ve got to hand it the band, they held on tight and continued to craft compelling rock songs and present them in their own way. Some songs are more notable than others. ‘River Of Pain’ and ‘Standup’ from Behind Closed Doors (1995), and ‘Love Worth Dying For’ from The Thrill Of It All (1996) are melodic rock gems, the unarguable standouts in two midlife-crisis rock albums that were commercially appealing if not perhaps their finest hours.

Their subsequent releases guided us through solid, well mapped terrain, leading us eventually to Shooting At The Sun (2003)and later to their most recent album, Rip It Up, (2017) both of which deliver some memorable, back to basics, “we’ve found our muse again” rock songs, like ‘Loser’, raw and soulful in just the right places, and gritty ballad with a soft centre, ‘Right From The Start’.

So there it is, 30 years of history in 30+ tracks. Obvious to anyone paying attention that Thunder were once contenders, and now, in mining their own back catalogue, they have reminded us why. 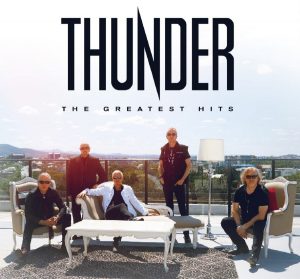