Let’s face it, we live in a world where there’s no shortage of live Thunder product. Early deluxe editions of both ‘Wonder Days’ and ‘Rip it Up’ contained live cds and then there was the live smorgasbord of ‘All you Can Eat’ – we were gorged, sated. So, you ask warily, is it worth handing over my hard earned shekels for the new, official, rather beautifully packaged and quite mind-bogglingly multi formatted live album/DVD ‘Stage’, recorded in Cardiff on last years tour?

The short answer is yes, but delving into the ‘why’s’ is going to take a little more time. Firstly, this is a proper live release, not a bonus disc or added extra. It is a complete, full-length show – not a festival gig or one-off at an intimate venue. It smacks of quality from start to finish – brilliantly recorded, expertly filmed and wonderfully staged. The sound too is perfect, full and detailed, it roars smoothly from the speakers.

Plus, this is a slightly new Thunder. As the name of the release implies, there’s no messing around, they get to the point, they’re taking this reformation seriously. Everything is slick, polished, there’s a genuine sense of determination and purpose here. The boys want to do this right. And indeed, this is why Cardiff was chosen, Thunder are giving back to the fans – it was their 2013 show in the same arena, supporting Whitesnake and Journey, and the response they received, that convinced them to step up from the annual Christmas show and occasional support slot and reform properly. At one point Danny takes the time to thank the crowd for that night (at which this reviewer was present, and yes, they were that good!).

Oh yeah, the music. It’s Thunder, a good night is a given, but the band seem to be on supernaturally good form, there’s a genuine synergy with the crowd – the kind that only a select few bands can achieve. Yes, there’s the usual dad dancing and crowd baiting from Mr. Bowes, but it’s more restrained, the band instead focussing on tearing into one song after another, playing them for all they’re worth. Everyone is on top form, Ben looking well and covering guitar and keys perfectly, Luke playing the guitar hero role with fire and imagination and Danny reminding us that, pound for pound, he’s our finest rock vocalist. Many singers with his, ahem…’experience’ might alter the key of a few of these songs to make life easier but Bowes pulls off a genuinely thrilling high wire act, hitting seemingly impossible notes with ease.

The set list is perfectly balanced. They ease into the gig with a few new songs and, by the time ‘River Of Pain’ appears, they’ve moved up a gear. The newly minted songs mingle perfectly with the classics, epic ballads trade punches with party time singalongs. Before you know it we’re into the encores, ‘Wonder Days’ jostling with ‘Dirty Love’, while Danny introduces his “magic finger” (I’ll let you find out).

You realise while watching this that, despite being a generation behind their heroes, Thunder have now attained their classic rock band status. And they just keep getting better. Yes, they may look like a bunch of ‘should know better’ dads out on a stag do but don’t be fooled, they are world class and seemingly overjoyed at getting another shot at reminding us of this. Class, quality – words I’ve used several times already but hey, I’m using them again. If you’re a Thunder fan this package is as essential as it gets. 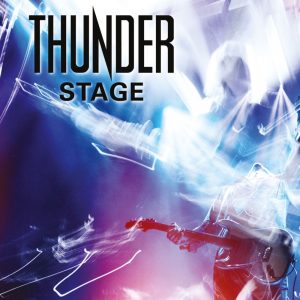