Sparked by a rework of ‘Love Walked In’ in 2017, Luke Morley’s aesthetic restlessness eventually led to a radical restructuring of some of the best moments from the band’s back catalogue. Much of Please Remain Seated is “front room” rock’n’roll, an everybody ’round the piano, warts’n all singalong. And while Thunder could hardly be described as hard rock dinosaurs, on other songs they’ve dabbled with their DNA in an attempt to build something new, and better, on the foundation that remains.

It’s impossible to pick out highlights – and it’s no exaggeration to say that each and every track has been significantly rebranded – but liberated from the discipline and convention of “making a hit album”, many tracks emerge from studio surgery infinitely more handsome than when they went in.

They’ve taken ‘Future Train’ on a seamless and delicately shaded detour through the Laurel Canyon Rock of sixties Westcoast USA, and an acoustic overhaul silhouettes a deconstructed ‘Dreaming Again’ against a Nashville Skyline.

That same freedom unchains ‘Girl’s Going Out Of Her Head’ and ‘Fly On The Wall’. One shakes loose a smoky, jug band blues from studio rock’s metronomic strictness, and the other very inventively redeploys its lilting chorus, turning the song’s sinister undertone into a warm, faux reggae lullabye.

The elegant rewiring of ‘Just Another Suicide’ and the dark, stripped back beauty of this new version of ‘Empty City’ enrich the recording by adding a natural ebb and flow. Both songs are bruising meditations on society’s deepening faultlines, and these new treatments add emphasis to already strong material. The knife edge lyrics, full of sharp metaphors, draw blood in the telling, reminding us that Rock’n’Rollers pay attention too. Who knew?

Had Thunder enjoyed the fame and acclaim that was once predicted for them, they wouldn’t have had the time and space, and perhaps not the inclination either, to make albums like Please Remain Seated. Yes, they had the hits (2 Gold Albums; 20 Top Fifty singles) and they were once contenders, but that ship has sailed, and now, in mining their own material, they have revealed a reinvigorated band at the peak of its very considerable powers, with Morley and vocalist, Danny Bowes in top form.

Maybe this is the album they were destined to make all along.

Please Remain Seated has been released as a single album in a rather attractive digipack and also in a head-turningly alluring deluxe, double CD version, and in a multiplicity of vinyl and digital versions . . . with bonus tracks, phew. . . 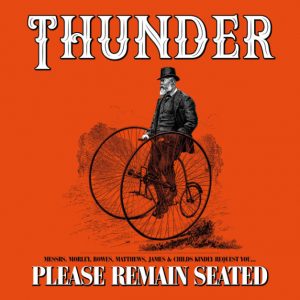